Happy Mother’s Day! What a joyful and necessary holiday this is. We owe so much to all the women out there who take on mother roles and nurture society. While one day is definitely not enough to honor all the moms out there, hopefully we all took advantage of the significance of this day and did something special for a mom, whether our own or not.

Unfortunately I did not get to spend Mother’s Day with my mom this year. However, I was given the opportunity to attempt to do something a little more out of the ordinary besides the standard card, flowers, and gift certificate.

As I have written about before, I love contests. I will enter, submit, or create just about anything for the chance to win something. Now, take a contest and throw in a social media twist and you better bet that I am not just going to participate, I am going to go all in!

Last week, Northern Quest Casino and Resort, an establishment in Spokane (and a great corporate sponsor of Grizzly Athletics!), held a special Mother’s Day promotion. Using the Facebook page of the spa located in Northern Quest, La Rive, contest organizers invited Facebook users to submit a picture of themselves with their mom (or mother figure). The pictures were put into an album and starting on Monday at noon and running through 6pm on Thursday, people on Facebook had the opportunity to vote for their favorite picture by “liking” it and/or commenting on it. The person who submitted the picture with the highest combination of “likes” and unique comments by 6pm on Thursday would win a special package for their mom that included a night’s stay in the hotel at Northern Quest, a massage, mimosas, and lunch at the resort’s popular restaurant. Didn’t take me much convincing to enter. 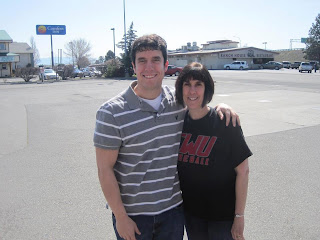 This was the picture that I submitted!!

Thirty-seven people entered the contest. To be honest, I was not overly confident. At work I run social media campaigns all the time which always result in amazing support. But when I run these campaigns, I am doing it with the Griz Nation brand, a brand that includes over 100,000 Facebook users in our family of fan pages. Because of the passion and dedication of our fans it doesn’t matter if I am running the Capital One Mascot of the Year campaign, a cross promotion for a department on campus, or a contest for a corporate sponsor, the response is going to be amazing. But completely take away that brand and add in a cheesy picture of my mom and I and you could see why I was wondering if any support would be there.

I have 678 Facebook friends. For someone of my age and for someone who spends way too much time as it is on Facebook, that is an incredibly low number. When I complained aloud about this fact, a co-worker confirmed that I indeed had to be a pretty big loser to have such a small number. Scouting the field a little bit before the contest I clicked on some of the other people who submitted photos and looked at their friend count. Many had over 1,000 friends. I clicked on the most attractive girl I found in the promotion album and saw that she had double the amount of me. I knew I was at a disadvantage.
Even though I felt a little behind even before the competition started, it did not mean I was not going to try my hardest to win with the strategy that I had drawn up.

One of the last ditch efforts I will do to try to increase attendance at non-football Griz events is to get on our mascot’s Facebook account and personally instant message students about the game/event. I will open with their name, add a little note about something that I saw after briefly looking at their profile, and then add the same message with all the event info after that. So even though I am basically copying and pasting this info, I am taking a few seconds to put a personal touch on it. Students love getting this perceived special attention from Monte and always respond favorably. This is what I implemented as my base strategy for the Mother’s Day promotion.

Over the course of the four days that the promotion ran, I sent out 250 personalized messages to my  Facebook friends.  They all were drafted the exact same way. I would greet the person, write a couple sentences talking about a specific memory, hobby, or acquaintance that we had and then I would hit them with the contest. I made sure to apologize a couple times for the inconvenience and then to also thank them for taking the time to read it. I would then add a last personal note to the request. The response was absolutely overwhelming. In the first couple days I would just message the people who were online as indicated by the chat tool bar. As the contest got into Wednesday I messaged all the people who had recent newsfeed activity. By Thursday I was messaging people who I classified as “shots in the dark”…people with no newsfeed activity who I had not talked to in a while. I do want to note though that I did have standards throughout this whole deal and there were some people who I would not reach out to…ex’s, old high school friends, people who had recently lost their moms, or moms who had recently lost a child did not get messages from me.
The contest went back and forth. Including me, there were two other strong competitors who battled it out for top supremacy. Late Wednesday night, my picture was down about forty “likes” to a picture of a lady surrounded by four little kids. Although it would be a little more dramatic to say that I was worried about the large disparity I really wasn’t.
I felt confident for two reasons:
1. The picture with the most “likes” on Wednesday night had missed out on an important part of the contest…unique comments were counted as well. Yes, comments and “likes” were added up to form a final number. So while I had personally told everyone to add a comment along with their “like”, this picture with just the most “likes” had not.
2. I had not tapped into a resource yet…
So while I went with soliciting “likes” off of personalized messages to my friends, pretty much everyone else in the competition generated “likes” by asking people to share the photo on their Facebook page along with the directions of the contest. You see, I have a tough time doing that. I, for one, would never put a random picture of a friend and his mom on my wall. Sorry, but my Facebook page is my space to advance my personal brand…not to help someone win a stupid contest. Because of my feelings on this subject, I didn’t decide to utilize this strategy until the last day on Thursday, and when I did, there was an incentive. Basically, all I did was request that people share the picture on their wall and if they did, they would be put into a drawing for a gift certificate AND they would be mentioned in this blog (see below*). I reposted this status every hour on Thursday. I also stepped up my personal campaigning a notch too. Pretty quickly, the numbers started to swing.
I think the real turning point came when our local radio DJ, Aaron Traylor (@DjAaronTraylor), gave me a much too nice shout out on his station and shared the picture on the 107.5 Facebook page.  What was once a 40 “like” lead for the picture of the mom surrounded by her kids had blossomed into a 20 “like” lead for the picture of some ugly dude in a gray polo standing next to his mom in Ellensburg, Washington.
As I had fully expected, the mom surrounded by kids picture made one late push at the end. However, because of the comment disparity and the “like” lead that my picture had built, it was not enough. When 6pm hit, my picture was the overall leader in both. And although the runner up tried to claim victory, you have to understand, I am a complete nerd. I had my friend sitting right next to me with her lap top so she was on the competitor’s picture the whole time while I was on mine. When 6pm hit, I was four “likes” (and countless comments) ahead. Nice try though.
About two hours later, the La Rive Facebook page announced the official results. My mom had won the grand prize. The mom surrounded by kids picture won second and their people complained. The third place person (contest gave prizes to three people) spoke out against the complaining, thanked Northern Quest, and then sent me a friend request. We chatted for a while, delightful girl.
I called my mom and told her the news. She was on cloud nine. I then told her that she would have to give back the regular gift I had gotten her…..just kidding. I immediately started getting texts and Facebook messages from people congratulating me.
The best part of this whole contest was that I got to do something special for my mom. The second best part was that I got to reconnect with a bunch of people who I had not talked to in a while. Sure, the initial message I sent was a basic form letter with a selfish request from me, but the conversation that developed afterwards in many of these cases was awesome.
Thank you so much to Northern Quest! They have a great social media department that is doing engaging and interactive work. In order to be successful in social media you have to show your client base that you care, and NQ is ahead of the game.
Once again, happy Mother’s Day! Thank you mom for the amazing job you have done raising the three of us. Enjoy your grand prize. I love you. Don’t Blink.
* Thank you so much to Aaron Traylor, Jerek Wolcott, Ellie Nadeau, Steph Williams, Sylvia Jensen, Julie Gemar Williams, Diane Beck, and Nick Batista for sharing my picture!