A few months ago, something cool happened. I was presenting to a room full of staff members at Coastal Carolina University about social media. When my presentation concluded, one of the employees in the room approached me. I did not recognize her, which made sense because she identified herself as a new employee.

In a very humble manner, she prefaced what she was going to say with “I don’t know if you will remember this, but…”

This particular CCU staffer had been on the job for a couple months. She had moved from a northern state to start fresh at a great university in a beautiful part of the country. But what made her specifically choose our little slice of paradise?

This person revealed to me that when she was deciding whether to move to Myrtle Beach, she did her due diligence researching the area. During this period, she stumbled upon Don’t Blink. She read a post I wrote in 2015 that gave my direct assessment on the pros and cons of living here. My frank opinion on Myrtle Beach life caused her to comment on my post. From there, I answered some of her specific questions via email.

It is not uncommon for me to correspond with readers via email. It also is not uncommon for readers to try a pizza place or watch a television show because I recommend it. But what is slightly uncommon (or so I think) is for a reader to use my blog as an influential source for making a lifechanging decision.

This staff member willingly approached me to say my blog played a part in her moving to our area and applying for employment at Coastal Carolina. She thanked me for providing counsel over email. I did in fact remember our electronic discussion, but I underestimated the power it would have.

To stand face-to-face with someone who started out as one of my “faceless” readers in a far off state only to become a fellow staff member in the same conference room as myself was pretty rad.

I write Don’t Blink mainly for selfish reasons – I have an obsession with keeping a written record of my experiences and I strive to keep my personal brand fresh – but I do hope that the time I put into a project such as this can help and/or benefit others. To know that I hit the mark in the latter objective is rewarding.

All of my traffic to Don’t Blink is 100% organic. However, writing over 1,400 posts over the course of several years will give you a large reach without ever having to spend a cent on SEO. True, the vast majority of my readers will never make crucial decisions based off of my wacky top five lists or Lay’s potato chip reviews. But if my posts can positively influence a small number of people out there who I would otherwise never encounter, I would call that a success. Don’t Blink.

This past football season belonged to Tim Tebow. With the odds stacked against him and with the media, fans, opposing players, and even his own coach and GM lining up to knock him, it definitely became the best story of the year when he became the Bronco’s starting quarterback and led them to the playoffs. Tebowmania swept the nation and a lot of people jumped on the bandwagon. He quickly became not just one of the most sought after athletes around, he became one of the most sought after celebrities.

Thus, it generated huge pandemonium and excitement when word broke about two months ago that Tim Tebow would be stopping in Montana for a three day tour around the state. In his itinerary was almost a full day in Missoula with the marquee event taking place in the Adams Center. Pretty cool, huh?

The group hosting him in Missoula was a local Christian community center (City Life). It is a long, drawn out story but supposedly a girl for her high school senior project wrote a letter to Tebow asking him to come to Missoula to help raise funds for the center. The quarterback agreed and a storm of publicity came with it. As it was a fundraiser, tickets were sold for $100 for a lower level seat and $50 for an upper level seat.

I don’t think twice about paying inflated prices for premium tickets to concerts and sporting events. I also am a big fan of Tim Tebow. But while I dump a lot of money into tickets and while I also admire #15, I could not bring myself to pay triple digits to hear him talk. I would cough up twice that amount of money to see him play…but not talk.

So although I was all set to bypass his Missoula appearance, I ended up watching it anyway. Because of my background DJing the football and basketball games for Grizzly Athletics, the Adams Center (the place where our department rents office space and facilities) from time to time asks me to DJ their events as well. I gladly accepted, knowing that I would have one of the best seats in the house, would get to play music for Tim Tebow, and would not have to pay a cent.

Tim Tebow was scheduled to speak at noon last Wednesday. I started working the event at 11am right when the doors opened. I played a bunch of feel good, non-suggestive music such as U2’s “Beautiful Day,” Katy Perry’s “Firework,” Garth Brooks “Standing Outside the Fire,” Journey’s “Don’t Stop Believing,” etc. Come noon Tebow had not arrived at the Adams Center yet so after one of the City Life representatives stalled for the audience a little bit, I played more music. Probably about seven minutes past noon, Tim Tebow himself walked down the vehicle ramp in the northeast corner of the arena right where my music table is set up. He stood a foot away from me as the City Life Pastor greeted everyone and then one of our former football players and one of our current assistant coaches introduced him. No, I never said anything to him. Surrounded by a few members of his entourage and then a throng of “official” (#sarcasm) looking City Life security guards in orange t-shirts, I decided to play it cool.

Tebow was introduced and he walked about thirty feet to midcourt to start the session. So this is how it was all set up: There was a chair for Tebow in the forefront of the Grizzly bear logo on the arena floor. Right next to Tebow’s chair was another chair that faced him. To the back left of the two forefront chairs there were two chairs and then to the back right there were two additional chairs. These six chairs faced in the direction of about 100 chairs that were set up on the south end of the arena floor for “VIP” attendees. It was a Q&A format. The person who sat in the chair right next to Tebow would ask the questions. After that person finished, someone else from the four chairs in the back would walk forward, take the seat next to Tebow, and resume asking questions. 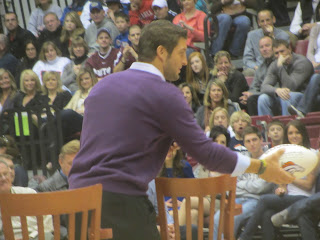 The City Life Pastor/Leader person first took the seat of honor next to Tebow and started asking him questions. It was pretty entertaining. He asked him rapid fire general interest questions such as “Do you prefer the Grizzlies or Bobcats?” (Grizzlies), “BCS or Playoffs?” (Playoffs), “Skiing or snowboarding?” (can’t remember what he said), etc. The questions were good and Tebow’s answers were funny.

They next brought up a local football coach who was affiliated with City Center and he asked Tebow questions strictly about football. It was pretty interesting. They covered high school, college, and NFL. Tebow talked a lot about how he transferred high schools so he could get a shot at playing quarterback. He went to a school with a terrible program and of course he turned them into state champions. He talked about some of  the Broncos players and how much he respected them. Not too much of a shocker there.
Then a girl who is battling a disease and whose dream it was to meet Tebow took the seat next to him. She only asked one or two questions and to be honest I can’t remember what they were. 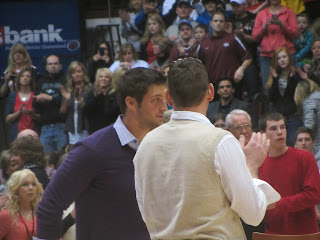 Next the girl who had written the letter to Tebow inviting him to come to Missoula took the chair. That whole Q&A period really centered on how important it was to go on a mission overseas in an impoverished country. Tebow and the girl traded stories and I simply lost interest.

To end it, a guy who had some position on the City Life team quizzed Tebow about his faith. I did not mind this at all because of course it was going to come out eventually, after all a Christian community center was putting it on. I actually thought the way City Life balanced the content of the session was very well done. They took a lot of time to ask Tebow just general stuff, questions that were not geared exclusively towards faith and religion. After the questions were finished, they prayed for Tebow and that was the end of the show.
Right when the prayer was over Tebow and his crew marched right up through the vehicle tunnel and off into the Missoula day. The funniest part for me was the chaos that happened right then: A dad and his little son carrying a football along with some more randos sprinted up the vehicle tunnel chasing Tebow, hoping for some personal contact (they were denied). At the same time, ESPN stormed the court to get ready for the Big Sky Conference Championship game that was occurring later that night. It was an interesting sight. 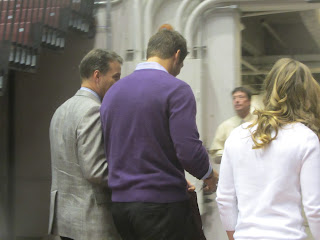 Just a few notes on the whole “Tebow Time.” I was so happy I did not spend $100 to watch that. The whole deal was much more boring than what I thought it was going to be. Again, credit City Life for trying to appeal to everyone in the audience by keeping the session lighthearted and not one-sided but I was just not captivated. Secondly, Tim Tebow did not come across as “straight laced” as I have found him to be on national interviews. He was definitely witty and even sarcastic at times.  Finally, he definitely did not come across as larger than life. Sometimes when you see celebrities in person you can feel a certain aura or special presence. Even though I thoroughly respect the man and cheer for him, I did not get that from him.

Right now I am watching this Peyton Manning saga closely. If he does go to the Broncos and Tebow gets released, it will just be another chapter in the adversity saga for him. God Bless him, there are not many players in the league who could handle what he has gone through. The kid is a winner and I  will be rooting for him, even if his Q&A sessions are a little boring. Don’t Blink.