I am pretty sure I have a new favorite game I love to play at restaurants and bars now. Easy, entertaining, and old school I have rediscovered my love for BINGO. My only question is why hadn’t I discovered it sooner?

Yes, I know I am late to the party when it comes to bars holding bingo nights. I realize that these games have been going on since I was playing brown bag bingo at my elementary school almost twenty years ago. The fact of the matter is, when I heard that certain places had bingo games on certain nights, I pretty much just brushed them aside, thinking that there was no way I could have fun playing bingo unless I was a young kid or a senior citizen. Well, it took a chance occurrence to change my attitude.
A little over three weeks ago, my friend Chris and I went to a little casino/restaurant called Joker’s Wild to eat. I had a gift certificate to the place that I had won through a radio promotion and I decided it was time to cash it in. We sat in the bar area and as we were finishing up, people started to file in. As I began to take notice of the once empty place starting to fill up, our waitress came over and asked us if we were going to stay and play bingo. We basically said “why not?” 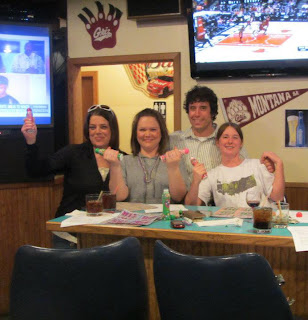 My new friends from bingo at Joker’s Wild
Thinking that we would just play a couple games we found ourselves still there two hours later deeply entrenched in the grand finale blackout game. Whatever was going to happen next didn’t matter too much because we had had a good time but it didn’t hurt that Chris lucked out and won (this is the same guy who correctly predicted “I’ll Have Another” to win the Kentucky Derby). Well technically, Chris shared the victory with a lady from a table who we had made friends with earlier. The two shared a $120 pot. When we left Joker’s Wild that night we subtracted $60 from our evening’s tab and added a few friends. Maybe I wasn’t too young or too old for bingo after all. 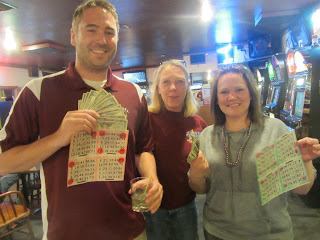 Chris, the Bingo Emcee, and the other winner/new friend (Nicole)

This past Friday night my friend Gabe invited me out to the Lucky Strike to play in its bingo game. Lucky Strike’s version was a little grander than at Joker’s Wild. More  people, more prizes, and more craziness, the atmosphere was pretty cool. I got to the venue about half way through and just started helping Gabe cover her numbers when they got called. By the time that particular game ended though I was already so wrapped up in it that I had to buy my own cards. Good music played throughout. Two emcees ran the game and called numbers. A powerpoint displayed the bingo patterns for each game. Cash, bar tabs, and other prizes were given away to the winners. It was just a well-organized, fun time. Although I did not win, it was another great experience.

So why is bingo such a worthwhile bar activity to take part in, regardless of your age? I can think of three main reasons:
First off, it is cheap. For around 2-3 hours of entertainment it will cost you between $10-$20 dollars. At Joker’s Wild, Chris and I probably paid $20 each. This was because we kept buying each game individually. As I mentioned above, we were initially just going to stay for a couple games so we bought cards accordingly but we kept telling ourselves “one more game….one more game….one more game.” If you just pay for the whole session up front, you save money. At Lucky Strike I only paid $10 for six cards that covered each round (there are usually two different bingo games per round). After the round is over, you rip off your card sheet and there is a fresh new sheet for the next round. Besides it being cheap, there are obviously also potential pay-offs. If you win, you get compensated. Many winners get their food, drinks, and bingo cards paid for and still have some extra cash at the end. It is a beautiful concept.

Secondly, bingo is a great bar activity to take part in because it is fair. Everyone has an equal chance of winning (depending on how many cards you buy) and it can’t be manipulated. Although I love to play trivia, I have a real tough time playing it these days. Although every venue makes a big deal about outlawing smart phones, I catch people using them under the table all the time. I also always notice the people who make frequent trips to the bathroom as well. It drives me nuts. During bingo, I don’t have to worry about these losers who are so cheap that they have to cheat.

Finally, bingo is great because it is relaxing. Sure, your adrenaline starts to pump a little when you are one number away from a bingo but that is about as intense as it gets. The emcee calls numbers, you mark your card, you drink beer. It a great way to rewind and be social.

I am excited for the next time I play bar bingo. I will definitely make a return trip to Lucky Strike. Playing with Gabe and her friends (now my friends too!) was a blast. I also got my eyes set on the bingo game they have at Hooters on Thursday.  I can’t wait to experience the twist that is put on their game. So mark bingo as another example of something that I have unfairly stereotyped. I am now a fan. Don’t Blink.