This week is truly a showcase for The University of Montana Intercollegiate Athletics Department  and basically the city of Missoula in general. On Friday night, Washington-Grizzly Stadium will be at the forefront of the sporting world. Luckily for me, I will be right in the middle of it.

This Friday, the Montana Grizzlies will host Northern Iowa in a Football Championship Subdivision (FCS) quarterfinal matchup. What makes this game so special are a couple things. First off, the game is at night. As Washington-Grizzly Stadium does not have permanent lights, whenever we hold a night game it is a huge deal. To be completely honest, hosting a night game in our stadium is like Notre Dame playing a night game on their campus, or, even better yet, it is kind of like the Chicago Cubs hosting a night game at Wrigley Field. It I just one of those things that does not happen very often, maybe once every two or three years. Secondly, this game is special because ESPN is coming to broadcast the game! No, this game is not going to be shown on ESPNU, ESPN3, ESPN Deportes, ESPN GamePlan, or even ESPN2…this game is going to be on the flagship network itself!

I don’t care what anyone says, this is a big deal. There are over eighty FBS teams that didn’t get an ESPN game this year. Not only that, but this game is smack-dab in the middle of primetime (8pm ET/6pm MT) on a Friday night! I do kind of get the chills thinking about how many people across the nation will be watching the game and how many tweets will be sent across the nation referencing the game. All eyes will be on Missoula, and I have to say, if I was a viewer at home in some part of the country where I had no idea about where the town of Missoula was or that the University of Montana even existed, I would probably be drawn into the game if I was flipping through the channels. I live for watching games between lesser known teams in obscure, but exciting, atmospheres where there is a lot on the line and  the passion from the stadium seems to seep through the television screen and into your living room. This is one of those games.

The atmosphere of this game will be dictated mostly by the way our team plays and by the amount of enthusiasm and craziness our fans bring to the stadium. The coolness factor of what you see on your TV screen come this Friday night really does rest mostly on these two factors. However, as with any sporting event or any type of production in general, there are always intangibles. I feel that my boss (Christie) and myself are a couple of those intangibles.

As I have mentioned a couple times before, Christie and I are responsible for the “game experience.” Christie is the mastermind of the whole operation, scripting out an amazing production which is really the greatest show in the state of Montana. If you have never witnessed a game at Washington-Grizzly Stadium, please put it on your bucket list. I take on a much smaller role than Christie as I serve as the stadium DJ and organize our mascot entertainment during the game. One thing about our jobs is that we are always under scrutiny. We have our critics and there are always wildly popular open forums for these people to go off on what we do and call us out. But it comes with the territory and I understand that. As part of my job, I do take notice on what people are saying about our department so I hear/read most of the criticisms of what Christie and I do. I am humbled by these criticisms and take note of many of them. At the end of the day though, I always have pride in what we do and I look at the overwhelmingly positive response that we do get from the non-anonymous people who appreciate what we do. 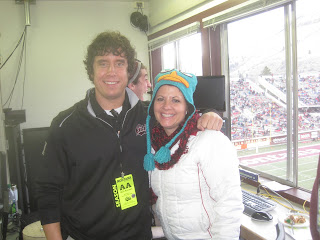 Christie and I up in the box where we put on the show.

I bring all of this up to illustrate how big of a game this is for Christie, myself, and our AWESOME team of interns this Friday. Not only do we have the usual UM faithful to please with a great show but we also have a national TV audience to show off to as well! I really can’t hide my excitement, honest to God, I do get goosebumps thinking of this opportunity. The nation is going to be invited into our stadium to see how we do things in Montana. Whenever I watch a sporting event, I ALWAYS take notice of the music that is being played as it is usually always picked up in an audible level by the station. People down in Texas, people chilling in Florida, and people relaxing in Maine are all going to hear what this dude with crazy curly hair is going to be playing.  Come that fourth quarter when we are up by a couple touchdowns, the nation better be ready for some Cotton Eyed Joe!! No doubt Monte will get some national airtime. As a matter of fact, much to my pleasure, Monte and Mo were featured on the opening of “Around the Horn” today as they rode into the stadium on an intertube pulled by a four-wheeler at this Saturday’s past game. This type of coverage will be increased this Friday. As I said, Griz fans are great and will make noise and be loud regardless of how Christie and I perform…but we are going to do our best to get something a little extra out of them. And what we hope to do is to shift an amazing atmosphere into an ELECTRIC atmosphere.

I want to circle back to where I began this post…with the Grizzly Football team. I can’t say enough about the players and coaches. I might throw the word “pressure” around when it comes to my job but it is only a small fraction of what our players and coaches feel. It is nothing short of admirable to watch the way they handle themselves with the circumstances/stress with which they must work under. Believe me, a lot of people doubted this team and they have done nothing but prosper and prove doubters wrong. To the diehard, real fans of Griz Nation…you guys are awesome and we can’t wait to have you in Washington-Grizzly Stadium this Friday. You make the athletes and staff so proud.

So, you might ask if Christie and I are nervous. The answer? No. You see, we have worked under these conditions before. Two years ago, our team hosted Appalachian State in the FCS semi-finals in an ESPN game that was coincidently at night. The result? The Griz won in one of the most memorable games in the history of Montana athletics.  Everything worked that night. Here is to a repeat of ’09. Go Griz! Don’t Blink.

Looking for this type of atmosphere again (Yes, I will play Sandstorm again)