Last night I attended T-Pain’s “Snowstorm Music” Tour. While T-Pain was the headliner, most people were just as excited, if not more, to hear his opening act, Gym Class Heroes. Held in the Adams Center in Missoula, the tour consisted of stops in secondary markets that are kind of a little off the beaten path. Last night’s show was the last one on the tour. Can’t really say it went out with a bang.
Besides Gym Class Heroes, there were three other opening acts. Actually, I am not even going to call them opening acts, how about just “warm up” acts? The first two bands/performers (I don’t even know what they consisted of) were just there to waste time and make noise. The third warm up act was Outasight which actually does have a song out right now that is getting some radio time. However, my group decided to bypass these “special opportunities” and we got down to the floor just as the Gym Class Heroes took the stage.
Now it seems that the consensus I got from most people today when I talked to them about the concert was that the Gym Class Heroes were great and that T-Pain sucked. I disagree. I don’t think GCH were as good as a lot of people said and I don’t think T-Pain was as bad. I just think they were both rather average.
For me, it was kind of tough to get into the Gym Class Heroes set. First off, I just really don’t like their music. I don’t like their sound, their lyrics don’t hit home for me, and their music simply fails to draw any emotion out of my body. So I guess they were already kind of off on the wrong foot with yours truly. But with an open mind and a nice buzz going, I was ready to give them a chance to win me over with their lesser known music, stage presence, and charm. They failed. Out of all the songs they sang, I just really did not connect with any of them. I didn’t really even think they sounded that good. As the tour was relatively low budget and they were not even the headliner, the overall production for their stage/set was pretty poor too.
But I think what turned me off the most to really enjoying their time on stage was Travie McCoy. He never built that rapport with me that I want when I go to concerts. I want to feel that special bond between the entertainer and the fan. I want to feel that line of respect that many great  performers can convey to their audiences (even if deep inside they don’t mean it). I thought McCoy was just disrespectful and immature. He led the crowd through a song where the whole time he switched his hand back and forth from a peace sign to an extended middle finger. When the song ended, the middle finger prevailed over the peace sign and he was flipping off the crowd. Throughout the whole set, he continually referred to the audience as “Mother F#$%^&*.” Now I understand he is using it as a term of endearment but I don’t like to be called that, no matter how good the intentions are. It is insulting to me. This is to not even mention that the majority of the audience was easily high school age and younger. Sorry, but a fourteen year old girl does not need to be referred to as a “Mother F!@#$%.” He also did stupid interactive exercises with the crowd that I think should be reserved for youth group ice breakers. Case in point, at one time in the concert he randomly requested that everyone give a hug to the person on their right. Maybe I was just jealous of the guy because ever since the concert was announced here in Missoula every  girl I know had been drooling over how hot he is. Don’t know how much that factored into it but I was not overly impressed with Gym Class Heroes. 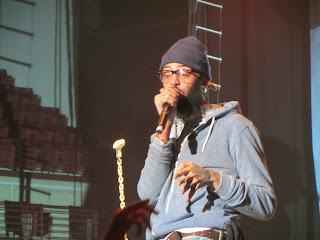 Travie McCoy last night. Don’t care for his personality
T-Pain burst on the stage by opening up with “Good Life.” It actually immediately drew me into the show and got me excited for what was to come. Now as I usually say in my concert reviews, the best concert entertainers are the ones who master their set list and sprinkle out their greatest hits throughout the entire show, thus keeping the concert goer entertained the whole time while also making sure that they have something to look forward to because they know that even greater songs are yet to come. Well, T-Pain followed this formula for about ¾ of the show. For that period of time, I thought the set was very entertaining and fun. He was performing all of the best party/dance hits from the past several years. I actually forgot how many good songs T-Pain had been a part of. If the songs that he performed didn’t serve as sufficient evidence of this fact, T-Pain made sure to routinely throw out the stat that he has had forty-something songs on the radio. At the peak of the show T-Pain was jamming, dancing, and sweating like a pig…it was fun! He performed “Low,” “Buy You A Drank,” “In Love With a Stripper,” “Blame It,” “I’m on a Boat,” and “Bartender.”  That alone is a pretty decent playlist to jam out to with a bunch of people. Then he performed a couple of songs that really got the place jumping. When he performed “All I Do Is Win” I admit that I got a little more excited than someone my age should.  Then he performed one of my all-time favorite songs, “All the Above.” Without naming the song, he said he was going to play his anthem and went right into it…definitely my favorite part of the concert. 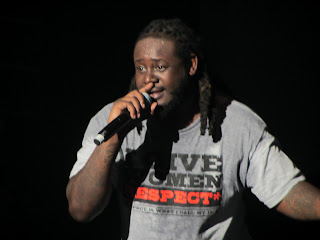 T-Pain in Missoula last night.
So besides him actually performing some good songs that got the crowd going, there were a couple of other good things about his performance. One of these things happened to be his dancers. Now remember how I said this was a low budget tour? T-Pain had TWO dancers…that’s it. But those dancers WORKED it. Yes they were hot and yes they had moves. They were entertaining to watch and I enjoyed them thoroughly. I thought his DJ was also pretty funny and added a comedic aspect to the show. Pain also had a gorgeous backup singer who did well. The stage and lighting was basic. For the majority of the show I thought T-Pain was funny and sincere when talking to the crowd. He was likeable and even relatable. Yes, things were going pretty well. 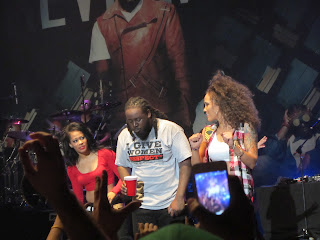 T-pain and his dance crew
As I said above, T-Pain put on a great show until about the last quarter of the set. Unfortunately for him, if you ask anyone about his performance in Missoula, most people are going to pinpoint how he went from entertaining and fun to weird. For whatever reason, T-Pain decided to get on a soapbox for the last part of his show and rant. He had the DJ put on some slow beat and he went off just talking about random stuff…again, talking, not singing or raping. He talked about how you should live every day to its fullest, be thankful for each day you wake up, treat people right, etc. etc. etc. Definitely a good message but really out of place and random. Besides the positive stuff he also rambled about using an autotune, basically saying something to the effect of “this is just me being me…you got to be yourself. Didn’t really make much sense and was not necessary. Also he built himself up quite a bit during this period too, making plenty of references to his collaborations, radio play, accomplishments, awards, etc. People literally lost interest in the concert. He capped it off by doing a strange freestyle rap that sounded very “Eminemish” and that totally contradicted his “I Respect Women” shirt that he wore for the whole show. Songs that people in my group were anticipating him to perform such as “Kiss, Kiss” and “The Best Love Song” never happened. It was just a bizarre ending.
All in all, I thought the show was going to be a little crazier than what it was considering it was the last stop on the tour. I was kind of expecting to see Gym Class Heroes and T-Pain kind of go a little nuts because they had reached the end of the road of their small market/small town odyssey. But no, it really just seemed like any other show. Lack of a big finale aside, even though it was not the best concert, the value was great. For $23.50 I got to see two big name acts perform on what otherwise would have been an ordinary Tuesday night.  Just another concert experience to put into my registry. Don’t Blink. 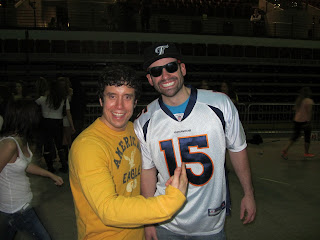 Dan and I after the concert