Having lived in Missoula for around six years now, I have tried many of the landmark restaurants around town. However, one of the most popular and oldest places around the city had eluded me for the longest time. A couple nights ago I decided to go eat at Double Front Chicken.
Double Front Chicken is a fried chicken haven located in downtown Missoula on the street that the restaurant is named after (Front). The history of the place is well documented but I would be lying if I said I knew the details about it. What is fact is that the restaurant has been around for many decades and is etched in Missoula lore as having the best chicken in the state of Montana.
Friday night I went through the doors of Double Front for the first time. Upon entering the front door you are greeted with a door right in front of you and then a door to the left of you. For someone who is visiting for the first time it might cause some confusion on which one to enter. However, I chose the left door and I made the right choice because it took me into the restaurant area. Once in the restaurant area things were no longer confusing. In front of you is the dining room area with an assortment of tables and booths with the kitchen area and carry out counter further back.  The dining room is cut in half left-to-right by a three foot high divider wall. The restaurant was pretty full and as we made our way to a booth on the right half of the restaurant I felt the sharp stare of just about everyone in the place.
If you like blue collar places, Double Front is the place for you. Everyone in the restaurant looked like they had just gotten off work at either the railroad, the cement plant, or the mechanic shop. Overalls, hats, and fu manchus dominated  the place. Because I was sporting neither of these three things probably explained why it felt like I was getting eye balled by the entire place. The smell of grease and fried food engulfed the whole restaurant. Lighting was pretty bad, there was absolute no concern or attempt at aesthetics. Double Front Chicken on this particular night was a one-waitress operation. With the restaurant pretty much full, it took a little bit of time to get served.
Of course I did not come to Double Front for the presentation, cliental, or service. I went for some chicken! To be fair to the waitress, it did take some time for her initially to come over to our booth but after that she was pretty speedy. When she came by for the first time I ordered a Shock Top and after she came back with the drinks we put our order in. We got the appetizer sampler and each of us got the white meat half dinner.
The timing of when our food came out was a little unusual. Probably about twenty minutes after we put our order in, our appetizer sampler came out. The waitress put it down at our table and then probably not even a full minute after we got our appetizer, our chicken dinners came out as well. I probably would have liked the two parts of the meal spread out a little more for two reasons: 1. I generally like to eat my appetizer before the main course and 2. It was way too overwhelming having all of this fried food in front of us at once.
Okay, ready to hear what the appetizer sampler was? It was a whole bunch of onion rings, mozzarella sticks, macaroni wedges, and corn nuggets (can you say “heart attack”?). The macaroni wedges were simply macaroni and cheese enclosed in fried dough. The corn nuggets? Corn enclosed in fried dough. It pretty much explained why America is so fat. I should mention there were just two of us so we had way too much food in front of us just with the appetizer sampler, not to mention the chicken. I mean there is not too much to critique about the appetizer. If you like fried food, you are in heaven. My favorite part of the sampler was the corn nuggets but after you eat enough of it, it all pretty much tastes the same. 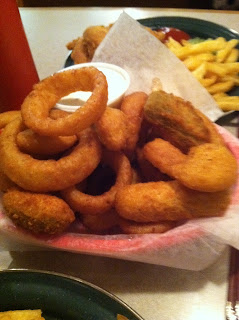 As I said earlier, I ordered the white meat half dinner. It consisted of a breast and a wing. In addition, the dinner was served with a bunch of french fries.  The menu says that all chicken dinners take around thirty minutes to cook but that night their fryer must have been working a little better than usual because we got our dinners within twenty minutes. To sum up their chicken in two words: Good and greasy. Because I don’t eat fried chicken too much I can’t really get too specific about what makes it so good but I can tell you it is very different than say chicken from KFC, Popeyes, or Chick-Fil-A. It is not as fried and it is not as dry. The breast had so much chicken on it, you definitely get a lot for what you pay. Even if I saved myself the thousands of calories and held off on ordering the appetizer sampler, I would gotten more than enough to eat with just the white meat half dinner. 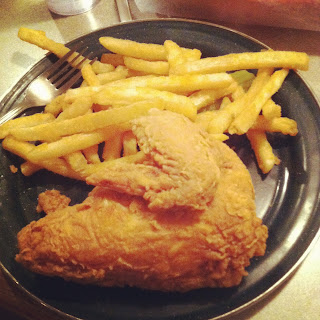 My white meat half chicken dinner

I mentioned the price…the bill came to $33.49. That included the two white meat half dinners, the appetizer sampler, and a couple beers. Definitely a value dinner. However, you do have to ask yourself if the cheap price is worth it. Again, what I ate for dinner that night was anything but healthy. I know just from that meal I probably surpassed the recommended caloric intake for a guy my  age for a whole week. It was definitely not one of those meals that after you eat it you can smile and say “That hit the spot.” Rather, my stomach felt upset and I felt a little disgusted with myself. Of course this is not the fault of the restaurant at all, it is just the consequence of what happens when you eat way too much fat and grease during one sitting.
Yes, I would recommend Double Front Chicken for someone who has never tried it before and who has a love for chicken. It is definitely not a place that I would go to on a regular basis though.  However, if you have a craving for some good chicken and you don’t mind punishing your body and clogging some arteries, give Double Front  a try.  Don’t Blink.

Another Missoula restaurant review: Yo Waffle