As I mentioned in a previous post this past week, the athletic department that I work for earned the right via our excellent players and coaches to hold our men’s basketball conference tournament. Throughout that post I talked about how excited I was to have the opportunity to take part in helping to host the tournament.  Still in my office after an extremely long day, I can’t express how much fun Day One of the 2012 Big Sky Conference Tournament was.

The whole day was full of constant movement and activity. Sharing our office space with the Big Sky Conference staff while assisting visiting schools and media as they walked in and out throughout the day was pretty cool. I got to put faces to many names and also see a lot of people I had not seen in a while. Many people in our department went above and beyond to accommodate our conference, our competitors, and our guests…a valuable example and lesson to someone like me who is still relatively new in the business.

When it came to the actual games, we could not have asked for a better night of basketball. In the 5:30 matchup, Weber State (#2 seed) barely edged Portland State (#3 seed). Portland State owned the lead for much of the game but could not hold on. It was so nice to work a good, high stakes, competitive basketball game with no stress attached. Let me tell you though, that stress certainly hit me for the 8pm game as Montana took on Eastern Washington. The Eagles held the lead for most of the first half. Come the second half, the lead went back and forth but ultimately the Griz won, 74-66. The first tournament game got a decent sized, appreciative crowd and then of  course come the Griz game Dahlberg Arena was explosive.
So it all comes down to tomorrow night. Montana will host Weber State in a rematch from just last week. Only this time, instead of a Big Sky Conference regular season championship up for grabs, it will be a Big Sky Conference Tournament championship up for grabs with an automatic bid to the NCAA Tournament to go with it.
For tomorrow night’s championship game we welcome ESPN2 into our arena. The exposure is priceless. I can’t wait for the game to start and for all of the texts and tweets that will come my way from my friends who will be watching in various locations across the country. It is time for Missoula to once again put on a show for the nation.
After I post this, I will once again walk out the doors of the Adams Center so thankful and so happy to be doing a job that I love. It does not get much better than this. Don’t Blink.

Yesterday was one of those long, but unbelievably fun, days at work. I strolled into the office at 7am and then happily exited out at a little after 11pm. The reason why I pretty much skipped my way out of the Adams Center after the sixteen hour day rather than limped to my car in pure exhaustion was because I had just been guaranteed a few more of these types of days in the coming week. Let me explain.

Last night our men’s basketball team played in one of the most important games staged in Dahlberg Arena in a long time. As the scheduling gods and fate would have it, the very last game of the regular season between Montana and Weber State happened to be for the Big Sky Conference championship. When the schedule first came out way back when, no one knew that the Grizzlies and Wildcats would both stand at 14-1 in the conference, thus ironically pretty much erasing those fifteen league games that each team played and making Tuesday night’s game a true championship bout. What was at stake? Not just the Big Sky Conference regular season crown but also the right to host the Big Sky Conference tournament.
It was a special night for the team and all of us in the athletic department. We sold Dahlberg Arena out as over 7,100 fans came to the game dressed in white to cheer the Griz to victory. As the people started to filter in I looked over at my partner who runs the in-game audio/video with me and told him it was going to be an electrifying crowd. Our team played great and defeated Weber State 66-51. For the basketball team, with the win came a great deal of respect , glory, and the right to host the tournament on their home floor, things that they worked for all season long and wholeheartedly deserve. For many of us on staff at the department, with the win came a whole lot of work…just the way we want it. 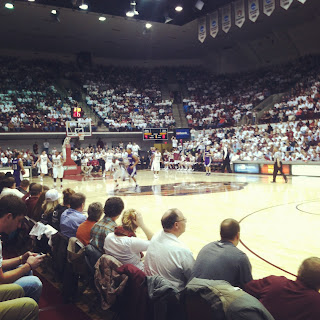 We get the privilege of putting on the Big Sky Conference tournament. We get to host three teams, two different broadcasting networks, league officials, NBA scouts, numerous media personnel, and fans from all over the region. Starting March 6, Missoula, Montana, will be the site where the final four teams in the Big Sky Conference will battle it out for an automatic berth to the NCAA Tournament. For me, I have always held championship week in NCAA basketball right up there with the NCAA Tournament itself (in the next few days I will devote a whole post to championship week). Having the opportunity to be right in the middle of it in a working role is a dream come true.

First thing you need to know is that our planning for this tournament began way before Montana beat Weber State last night. As soon as the landscape of the Big Sky Conference kind of came to focus and our men’s team stayed at the top of the standings, key people in our department started to make arrangements for the scenario in which we would host. Acting as “middle (wo)men,” these all-stars in our department communicated with the Big Sky Conference league officials on one end and with us staff members on the other to secure that in the event that the Grizzlies were number one in the conference at the end of the night on February 28, The University of Montana would be all set to host the tournament.
Objective One completed.
After the buzzer sounded last night, we went to work getting ticket information out and marketing our campus as the home of  the Big Sky Conference during March 6-7. Working off of the high that our basketball team gave us with their victory made the late night work so much fun and exciting. It definitely set the tone for the next several days.
You would not believe all of the logistics that go into hosting a four team tournament: Where do the teams enter the court from, where do teams sit when they are not playing, what benches do they occupy, where to seat visiting fans, where to place visiting cheer squads and mascots, parking issues, staffing issues, where to station the media workroom, where to stage the press conferences, how to best accommodate ESPN, how to make all the various radio crews happy, what to provide in the hospitality room, where to sell Big Sky Conference merchandise, internet issues,  pregame and postgame protocols, and so much more.
I have the utmost respect for the very valuable people in our department who are charged with taking the lead in overseeing all of these tasks and delegating them down the line to us staff members. The stress that comes with it is immense. The knowledge and experience that they possess is amazing.
From here on out, each day will become more and more intense as we approach Tuesday and Wednesday of next week. Meetings will be held, one-on-one conversations to tie up loose ends will occur, long e-mail chains will grow and grow.
My main role leading up to the tournament will be to market it the best way possible through new media. Our website, social media channels, text messaging data bases, and e-mail lists will be devoted to the tournament. Also, the three of us who make up the marketing department along with our great crew of interns are going to work together to put a special emphasis on attracting the student body to the game on Tuesday, and, hopefully (if the Griz win Tuesday night’s contest), the game on Wednesday.
Come the actual tournament, I will be at my usual spot, running the in-game audio and video (aka music and Griz Vision). I am personally thrilled that for the second time this athletic season, we get to welcome ESPN to our campus. When they came for a football playoff game in December, Griz Nation put its best foot forward and impressed the ESPN crew and the nation. If Montana wins on Tuesday to earn a spot in the championship game to be broadcast on ESPN2 on Wednesday night, I know our players and fans will give off the same impression. Welcome American to Dahlberg Arena!
We are embarking on the last couple hours of February. Can we please get to March? There are few things better than March Madness and to be able to have a role in the lead up to it is pretty sweet. Thank you so much to the student-athletes and all of Griz Nation for affording us the chance to host this tournament. You make us so proud and our jobs so fun. Don’t Blink.