This past Friday night I made the trip to Spokane to watch Reba Mcentire live in concert. She was playing out at Northern Quest Casino, a continually growing resort stop in the Airway Heights area of Spokane. This summer, Quest added an outdoor concert venue. It was cool to experience a concert with such a premium name in a brand new place.
I left work on Friday afternoon and I drove over to Spokane (no speeding tickets this time). Once in Spokane I went to my parents’ house and got my brother and the two of us headed out to Quest. After a couple pregame drinks and gambling, we went to the concert portion of the complex. I have to say, it was not like the venue was that overwhelming. You had the stage and you had a big lot of grass with chairs. Quest’s parking garage was to the left of the stage and then the actual casino building sat about 50 feet in back of the stage and snaked to the right of it. The crowd was definitely mixed. I saw a lot of people in their forties and fifties, lots of couples my age who were out for a nice date night, and  then tons of girls in their teens.
So the opening act for Reba was Sunny Sweeney. I have to admit, and this is kind of embarrassing, but prior to the show I did not even know who Sunny Sweeney was. I did not know if Sunny Sweeney was a band, a male singer, or a female singer. Well,  Sunny Sweeney is a young and very attractive female singer who is on the rise. Once she started singing, I did recognize a couple of her songs. You know that phenomenon where you only start to realize how many people drive the same type of car you drive only after you actually buy it?  Something kind of along these lines happened to me with Sunny Sweeney. The next day when I turned on CMT, Sunny Sweeney’s video for “Staying’s Worse Than Leaving” was playing! Then, and I am not making this up, when I turned on the radio a couple hours later, the song that just started playing was “From A Table Away.” Pretty cool. 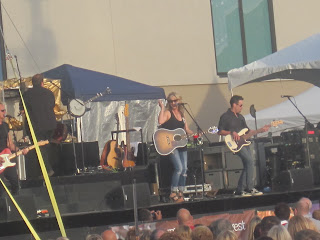 Summer Sweeney this past Friday!

Back to Sunny’s actual performance…she was very good. I liked her stage demeanor too. She definitely had a cocky attitude but I kind of liked it, I can do without all the complimentary BS that performers usually throw onto their audience. She reminds me exactly of a Miranda Lambert type entertainer/personality. She sounded really good, the Quest concert venue lends itself very well to sound. One cool story about Sunny from the concert: Once Reba started playing, Sunny made a really random appearance on the concert lawn. She crossed over from where her tent was backstage over the fence and to this area in the corner where there was practically no one. Thank goodness for my brother’s good eyes because he spotted her and alerted me. We went right over to where she was standing. By this time a small crowd had gathered. We were two feet away from her. She was drop dead gorgeous. It became kind of a weird situation because Sunny was really nice but she kept saying that she could not be visible while Reba was performing (which makes sense). She kept looking up at the stage and then right back at the probably 15 person crowd that had gathered around her. Back and forth her eyes shifted, she was very visibly uncomfortable with the situation and I did feel bad for her. I really wanted my picture with her but I was not going to push the issue considering the circumstances. As she was leaving I said “Good show, Sunny” and she looked at me and said, “Thanks, hun.” I never really figured out what possessed her to make that appearance. 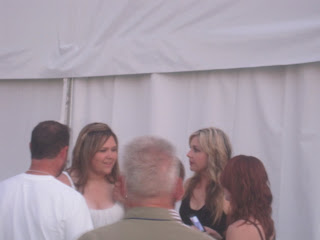 Sunny randomly appeared and we went on over! 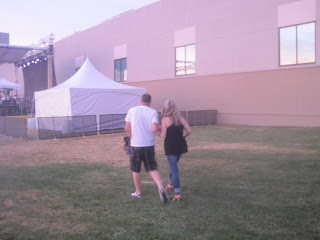 Sunny walking back to her tent. No idea why she even came out.

Once Reba took the stage, Glen and I decided to see if we could get up close…real close. If it was not for our liquid courage we probably would not have attempted this because it was an assigned seat show and tickets were very expensive. Adding to this, the concert security was very strict and they had no problem telling people what was up. Imagine our surprise when Glen and I pretty much walked up unbothered to the bicycle rack type fence that separated the stage from the seating area. Granted we went over to the side a little but it was still front row and still way better than the seats people were paying $200 for. Again, I thought security would have protected the integrity of the premium seats from people like Glen and I who did not even pay half as much for our tickets, but no.
It is hard to critique someone like Reba. She is a flat out entertainer. Everything about her performance was absolutely natural. No dead spots, no awkward moments, no mishaps. It was flawless. When you have as many hits as Reba does, you never have to worry about getting bored at her concert. Yes, she did play her new stuff off of her latest album but it was all sandwiched in with her signature songs. I said the venue itself was not overwhelming but the sunset sure was that engulfed the sky as Reba started her set. The whole thing was just perfect. 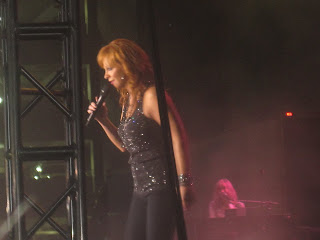 So this is where I watched the concert from. No zoom. 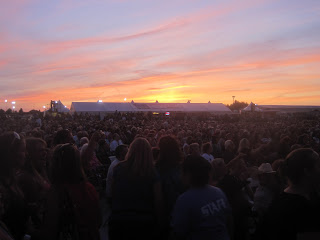 My favorite song that Reba sings is “Turn On The Radio” and she rocked it when she performed it on Friday. I firmly believe that she was singing to me during that song because she came right over to where we were standing and seemed to look me right in the eyes as she belted out the chorus of “You can hear me on the radio….” It was so cool. I normally don’t care for it too much in concerts when artists sing songs in which they have collaborated with other artists on but Reba was an exception. She did not need Kelly Clarkson at all when she sang “Because of You.” I fell in love immediately with her new single, “Somebody’s Chelsea” the moment she sang it. When she sang “Consider Me Gone” you could consider me in a seventh heaven. Reba did perform an encore and predictably she performed her most well known song, “Fancy.” She received at least a two minute ovation.
On Friday night I saw one of the best performers I have ever seen live before. I would give her top three. Not only did I get to see a legend put on an amazing show, but I got to see it up close and personal. Thank you Reba, I will always “turn on the radio” for you. Don’t Blink. 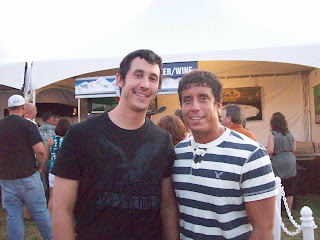 Glen and I at the concert