Today my friend told me she was lucky enough to see Marcus Trufant (Pro Bowl cornerback for the Seattle Seahawks) and get his autograph. To this I responded “So what?”
I am one of those people who have never seen the value in autographs. I find them impersonal, easy to lose, and a terrible way to remember meeting a famous person. Let me back up for a minute though.  I should say that I am not a person who gets star struck. There are exceptions, but for the most part I highly respect people who are amazing at what they do and who are relevant on a national level but I do not idolize them. You will not see me joining a fan club, holding a sign at a concert, or wearing someone’s jersey. It isn’t something I do. So maybe right from the start I am turned off by the whole notion of autographs. But even if I was a 15 year old girl who worshipped the ground Justin Bieber walked on, I don’t see how an autograph could make me feel like a bigger fan or give me instant “Bieb Credibility.”
I sometimes wonder what celebrities think when they are bombarded with autograph requests. I wonder if they kind of feel that the whole idea of scribbling their name on something is a little silly.  When  I have had the chance occurrence of being in the same place at the same time as a celebrity I always shake my head at people who scramble to find a napkin and a ball point pen and shove it in the face of the person to be signed. To me, there is absolutely no meaning or personality in that autograph, and absolutely no solid memory of the meeting/interaction between you and  the celebrity. 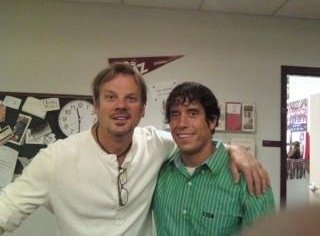 Getting a picture with a music star, actor, athlete, etc., is in my opinion 100x better than getting an autograph. A picture is special. A picture is durable throughout the years, shows  a connection between you and the celebrity, is easy to show off to all of your friends (especially in the age of social media), and is a great way to remember the encounter you had with that person. As I said, I do not get star struck and would never think about asking someone for their autograph but I would, and I have, asked a celebrity for a picture with him/her. Not only is it a much better way to remember and document your encounter with a well known person, it also makes it much easier on the celebrity. Instead of having to go through the process of signing some weird object and even dealing with the annoying requests of “can you sign it to so and so” the celebrity just has to stay where they are at and look into a camera. It also helps push out the personal brand of the celebrity because 95% of the time that picture is going to go viral and the celebrity is going to be exposed to thousands of other people. A picture is a win-win situation for both the fan and the celebrity as opposed to an autograph. 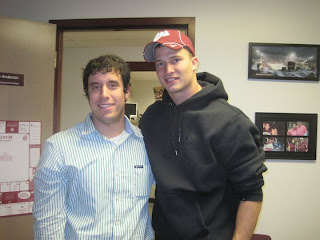 Me with Missoula’s celebrity, Marc Mariani.

You know what I can’t fathom even more than autograph seekers? People who buy autographs. Especially the people who buy autographed memorabilia with no intention whatsoever of selling it for a profit. When I travel city to city, especially in sports towns, I make it a point to go into memorabilia shops and look at the ridiculous prices. I can’t believe some of the stuff they are trying to make money off of. Honestly, what type of a person is going to buy an Omar Vizquel signed baseball for $300?  It is absolutely laughable and random.  I wouldn’t even touch stuff supposedly signed by baseball greats. Do you really want to shell out $2,000 for a Mickey Mantle signed baseball? Even if you bow to his grave every single day, would you really trust that that ball was actually signed by him? I find these memorabilia places beyond sketchy. I really couldn’t care less about a certificate of authenticity, that means absolutely nothing to me. That could be just as easily doctored as the scribble on the baseball that is supposed to belong to the player. If you are the type of person who is going to pay some straggly guy in some hole in the wall shop X amount of dollars for a signed picture of Ozzy Osbourne or a signed football of Johnny Unitas, you got money management issues my friend.
If you waste a celebrity’s time, make it worth your while and the celebrity’s while and create a lasting memory that has legitimacy to it. Don’t waste time with autographs and definitely don’t waste money with autographs. And be sure to remember one thing when you are taking that picture with your number one celebrity: Don’t Blink. 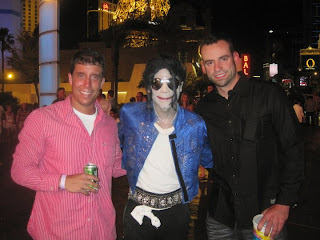 Me and Dan with Michael Jackson before he died