Last night I went to the Sara Bareilles concert here in Missoula. I will be the first one to admit that I am not a huge Sara Bareilles fan. Not because I have anything against her or because I dislike her music, she is just not someone who I would get really excited about seeing. But because I love concerts and because I had not been to one in a while, I decided to go.
Bareilles performed at The Wilma Theater. For most of you who do not know, The Wilma is an old theater in Missoula that hosts concerts and shows movies. The theater works with a bunch of different promoters to bring in B-List type acts along with other much less well  known singers/bands. I guess I should choose my words more carefully. I don’t want to insult some of the legit national talent that does perform at The Wilma by calling them B-Listers. I guess I should say that the venue attracts those types of acts that are very relevant on a national stage but who would have a tough time filling 12,000 seats in arenas. Some of the acts I have seen at The Wilma before include Rodney Atkins, Jake Owen, Gabriel Iglesias, and Jewel.  So as you can see, it is not like slouches are playing there.
Last night’s concert had a very good vibe surrounding it. The show had sold out long before Friday and Missoula was just the fourth stop on Bareilles’ tour so it was still very fresh. It was a beautiful summer evening in Missoula and people did not seem to care that the ticket line to get in spilled outside and down Higgins Avenue.  Rachel and myself certainly did not mind the wait as the drinks we consumed at the Tamarack put us in a good enough mood to enjoy the short ten minute wait in the perfect 70 degree weather. It also allowed us to tolerate the droves of high school girls who made up the majority of the audience. 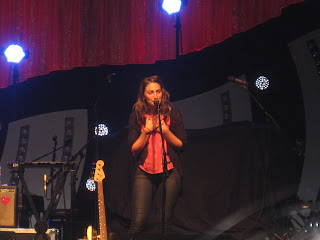 The show started with Sara Bareilles coming out on stage and introducing Raining Jane
The concert started off with Sara Bareilles coming out on stage and introducing the opening act, Raining Jane. Bareillies immediately won points from me by taking the time to do this. I found it extremely classy. Raining Jane is a four person chick rock band. I wish I knew more about music to give you more of  a description on their style. I found this group a lot of fun. Usually for smaller concerts, the opening act(s) usually suck. However, I really liked Raining Jane. Their music was actually very good  and they told some really good stories. They almost did not make it to Missoula because their van broke down. They were just outside of Warm Springs when their van bit the dust and it looked like a very strong possibility that they would miss the show. However, a couple from Missoula who happened to be going to the show that night pulled over and picked the four girls up and got them to The Wilma in time for the show. Raining Jane of course recognized these two good Samaritans at the show and let me tell you, they were the most stereotypical looking Montanans that you could find. The dude looked like Joe Dirt’s brother. It was quite amusing. Back to Raining Jane’s set. They played great, they really did gain a fan in me. They had two front girls who took care of vocals and played guitar/cello, one girl who was on percussion and made jokes the whole time, and one mute who did not say one word or smile the whole time but played bass. This combination worked and I was so happy to be entertained during an opening act at The Wilma after all the disasters I have seen before. 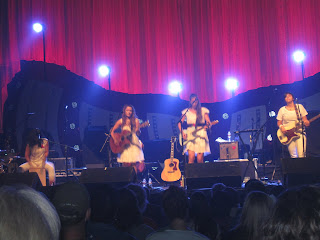 It is tough to put on a good show at The Wilma. The building is old, the acoustics are not very good, there is little stage room, and the seating is weird. It really is up to the performer’s tour crew to come in and makeover the place before they put on their show. Some acts put in more effort than others. Sara Bareilles’ entourage did a fine job. It was one of the better stages I have seen for a Wilma show. About 30 minutes after Raining Jane concluded, Bareilles took to the stage. She opened with “Bottle It Up.” An observation that Rachel made right away and which I definitely agreed with was that for the first couple of songs, Bareilles’ band completely drowned her vocals out. However, it would get much better as the show went on. I don’t know if I really clicked with her onstage personality. It seemed to me that she was trying to push her edginess a little too much on the audience. But she was all smiles the whole show and she really seemed to put 100% into the show. It is so easy to tell when an artist is half-assing it up on stage, I have seen it several times before so I always appreciate it when a band/artist gives it their all. Bareilles stuck to the standard set model by playing her hits at the start and end while playing a lot of her new stuff and her lesser known stuff in the middle. Towards the latter half of her set, she went off stage and into one of the aisles and played Mumford and Sons’ “Little Lion Man.” It was definitely one of my favorite parts of the show. 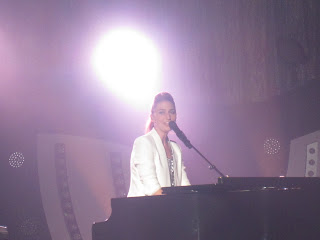 Sara Bareilles put on a show for the sold out Wilma

The lighting for the show was awesome. Again, when you go to a show at The Wilma you are not accustomed to being swept off your feet in this way. White, green, blue, and red lights all engulfed the stage at different times. It was hard for me to tell if she was truly happy to be in Missoula or not, usually I think I have a pretty good grasp on whether the artist is truly into the show (much different than giving 100% effort), but if you made me give you a straight up answer I would say yes. She was just much tougher to judge than other artists. She definitely dished out the typical “kiss the ass of the town you are in” compliments. Fake or not, you always have to yell and clap for them.  Bareillies finished with a two song encore, the first of which is Rachel’s favorite song, “Gravity.” 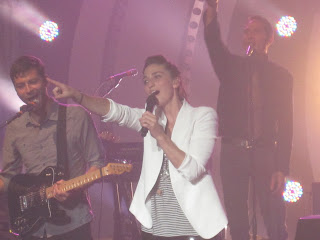 In the end, I was glad I went to her show

Sara Bareilles and Raining Jane put on a good show last night. It was much better than what I thought and it was very relaxing. Best of luck on the rest of the tour ladies! Don’t Blink.