There is a drinking problem at professional sports venues across the country.
I know this opinion by me is not very popular and it makes me sound really old. But it’s true. It goes without saying that I am a huge sports fan and I love attending various athletic events. Through the years I have had the opportunity to attend numerous professional sporting events in numerous venues in numerous leagues. I have seen the same trends in basically every place I have visited. We have to face it, many fans simply use a ticket to a ball game as an excuse to get drunk and unruly.
Before I go on I want to explain one thing. I am NOT against alcohol at professional sporting events. Personally, I believe there is nothing better at a game than cold beer. Just like at a concert or at a show, a nice buzz can really enhance the whole experience. The action on the field/stage is more intense, you are more relaxed, and the strangers sitting in the seats right next to you are more bearable. I don’t just get it, I embrace it. 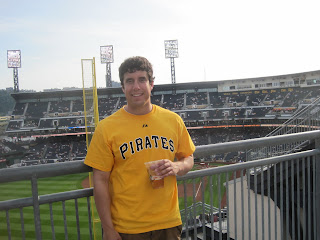 In no way, shape, or form am I advocating the end of alcohol sales at pro sporting events.

What I am against are the people who go to games and get so bombed that they become a distraction to others and turn from fans into idiots.  Now I understand that in some leagues this practice is not going to be reversed, no matter how much effort is poured into preventing it. An example of this is the National Football League. When it comes to the NFL, it truly is Clown Town. If you have ever been to a game before, you know exactly what I am talking about. If you want to see a diehard, passionate, crazy fan base, go to an NFL game. Fans are beyond ridiculous…and mostly beyond drunk. Because of the nature of the game, I never see this changing. The first ever NFL game I went to was at the Kingdome in Seattle when I was in the third grade. The Seahawks were playing the Kansas City Chiefs and we were sitting in the fifth or sixth row of the upper deck. I was dialed in on the field when suddenly I was ejected out of my seat and thrown down a couple of rows. Some wasted dude in a Kansas City jersey had fallen about ten rows down and crashed into me and my friend’s dad, sending us both for a ride. The game had not even started yet. But let me tell you, that guy was a real champ cause he dusted himself off after that fall and managed to drunken walk to the nearest concession stand no less than four times throughout the game, double fisting it each time he came back. Throughout the years , each time I go to an NFL game the shenanigans I see get worse and worse. It will forever be that way. NFL games are not events for kids to go to anymore.
I want to focus my attention more on a sport that has a reputation for being family friendly, a sport that is economically more available to everyone. I am talking about America’s Pastime, baseball. I want to go back to what I said earlier and apply it directly to baseball: There is nothing more American than baseball and beer. The two go together perfectly and I wholeheartedly support it. However, some people abuse it like no other. This summer I have seen so many examples of people acting like complete morons when intoxicated at baseball games.
When I was at PNC Park in Pittsburgh this May, I walked into the bathroom to see a guy throwing up in a urinal with a beer in his hand while his kid looked on. It was despicable. How could he let himself get that way? Who was driving his kid home?
Last month while my brother and I were in Seattle for the Mariners-Braves series, we watched in shock as a Safeco Field usher let some belligerent fan walk up and down the aisles talking to every single person he passed. He was seriously just aimlessly wandering, he was nowhere dialed in on the planet. He was exhibiting very strange behavior such as yelling, picking fights with random people, starting chants about the Seattle Sounders, stumbling all around, trying to give hugs to various girls, and going up to the beer kiosk at the top of the stairs trying to get more alcohol even though it was the ninth inning (beer sales stop after the 7th inning) and he still had a beverage in each hand. It was ridiculous. Safeco Field has an Alcohol Enforcement team that they have scour the stadium checking for disruptive people and underagers but they were nowhere to be found when this idiot was rampaging up and down the section (SIDE NOTE: The Alcohol Enforcement team at Safeco Field do actually perform their job when they are around. My brother went to a Mariners-Yankees game earlier in the season and two of  the girls he was with were ceremoniously kicked out of the stadium when the AE team saw that they needed to hang onto my brother to make it through the concourse). 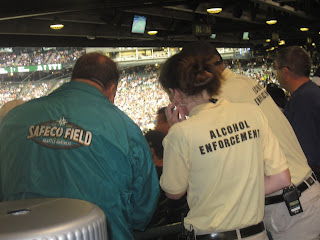 This activity does not just occur at Major League Baseball games. It also happens at minor league games as well. Just two nights ago at the Osprey game my friend and I watched embarrassingly as two dudes drunk out of their minds kept yelling F bombs at the umpire in a section full of kids. A section full of kids!! Even if you are trashed, how bush league can you be? I kept my mouth shut because I knew if I said anything it would make the two losers even more irate and a nasty scene would probably have been played out in front of all those kids who had already seen/heard enough.
Okay, so I know many of you might be saying to yourself “These are isolated, specific incidents. There are drunks everywhere. No need to overreact.” The thing is, these are not isolated incidents. They are happening multiple times a night throughout ballparks in America. I just used the examples to shed light on what is going on. Pretty much every game I have attended this summer, whether it be MLB or minor league, I have seen overly intoxicated people who act like fools, embarrass the people they are at the game with, and ruin the experience of fellow fans. There are people who go to these games to not just drink until they feel good but to drink until they are belligerent and out of control.
What’s my solution? Before I tell you, I want to give credit to the various teams of the MLB, NFL, and the NBA for making strides in combating this problem. Many organizations have these Alcohol Enforcement teams that I spoke about when mentioning the Seattle case. Almost all organizations have a text messaging system for fans to utilize if they are in close proximity to an unruly fan. You text your seat and row to a certain number and assistance arrives. This is great but the problem is that many people are not savvy enough to use this feature or they miss the announcement entirely. I believe in MLB parks that about every other five rows should come equipped with a button that fans can push in case of an incident that will immediately dispatch police officers and/or Alcohol Enforcement personnel to that area. Secondly, I believe ushers should be trained on drunken behavior that is grounds for automatic dismissal from the game. Really, it is not that subjective when it comes to determining if someone is too drunk to be at the game. Here are five guidelines that ushers should use in determining if it is time for someone to call it a night:
1.      Person can no longer walk like a normal human being
2.      Person yells obscenities at umpires or opposing players (when it goes beyond general heckling and involves cuss words and racial/personal attacks)
3.      Person picks fights or starts arguing with fellow fans
4.      Person is disconnected/unaware of the game (I see passed out fans all the time)
5.      Fans complain about the person
Or seriously, just make this your general rule: If the activity of the fan would not be allowed in a bar, it should not be allowed in a baseball stadium. If you want to get bombed and act like an idiot, go to Maggotfest/Vegas/Mardi Gras/(Enter some event where it is socially acceptable to make a drunken ass out of yourself).
Going off on a little tangent, I hope most universities stick to their guns and prohibit the sale of alcohol at their events. I know there are universities who already sell alcohol at their events but let’s keep majority of NCAA competitions dry, especially football. Besides, thanks to tailgates and other pregame festivities that help make college football the absolute best sporting spectacle in the world, fans and students get their fair share of alcohol anyway. As anyone who has ever sat in a college football student section before knows, the majority of the people sitting in those seats are drunk enough already. I would just hate to see alcohol sold inside the gates and see the atmosphere of college football turn more into the out of control craziness of an NFL game. In general, intercollegiate athletics does not mix with alcohol, keep it out.
I do want to say that for me personally, I do not let belligerent people get to me at games. I am always much more focused on the action on the field/court and on the people I am at the game with to really care. In the instance when the person does manage to get my attention (good job!) I just smile…it is kind of funny to watch people make fools out of themselves. I am more a proponent on this one for the enjoyment of others who have brought their kids out to the stadiumm and for public safety in general. So let the games go on and let the beer flow. Just please live the High Life and drink responsibly. Don’t Blink.