Last Thursday I had the opportunity to attend Dierks Bentley’s “Country and Cold Cans” tour as it made a stop in Missoula. With the Eli Young Band as his main opening act, I had the date circled on my calendar for a long time.

Among others, the group I attended the concert with included my boss Christie, co-worker Jimmy, my intern Nick, and my friend Kathy who had made the trip over from Coeur d’Alene, Idaho. Jimmy hails from the great state of Texas and it just so happens that he has contacts within the country music industry. Because of these special connections, he was able to score us meet and greet passes with the headliner himself, Dierks Bentley. So while the first opening act, Will Hoge, opened the show, the five of us went to the designated area in the Adams Center to meet Dierks.
If you have never experienced a concert meet and greet before, the best way I can describe it is organized chaos. The performer’s crew simply throws up some pipe and drape (fancy talk for temporary curtains and poles) and welcomes in 50-75 excited, liquored up people to meet the star in a short period of time before he/she/they have to go on stage and perform.  Because the crew has had loads and loads of experience doing these types of things night in and night out and because they tolerate absolutely no funny business, these meet and greets usually go on without a hitch.
We had to line up in the northwest corner of the Adams Center concourse at 7:45pm. After about twenty minutes of standing in line, the organizers let us all into the meet and greet area and briefed us on the rules. Basically, they told us to compose ourselves when we met Dierks and to keep it short. They told us that we were allowed to have ONE item signed and ONE picture taken. They emphasized to have the item out that you wanted signed as you approached Mr. Bentley. They also stressed that we were not to take any pictures at all with our own devices while Dierks was present. You see, they have a professional photographer take all the pictures. It is a pretty decent deal, a couple days after the meet and greet you get to go on Dierks’ website and download for free a nice, professionally taken photo of yourself with the star. You can use it at your disposal to put up on Facebook or e-mail to anyone you want.
After the briefing the mob that had circled around the person who explained the directions broke and the line to meet Dierks formed. The five of us were a little slow to realize that this line was forming so by the time we actually did realize what was going on, we were far in the back. Well, we weren’t going to settle for that. Nick, Kathy, and myself remedied the situation by cutting half way up the line while Jimmy took the initiative to cut in front of about 80% of the people in line. Christie blended in by following Jimmy and sticking at his side. I mean we didn’t care about missing Will Hoge but we were going to make sure we didn’t miss a second of the Eli Young Band.
Now remember how I told you that there was a strict policy not  to take any personal pictures while in the meet and greet area? That simple rule was a rather tough one to follow for me. The moment Dierks entered the meet and greet area and started receiving the people in line I had my camera out and started snapping away. By about my third  picture, the staffer who was assisting the photographer looked back, saw me, made eye contact, and exclaimed “Any more shenanigans and you are out of here!” Yes, he actually said shenanigans. That camera went right back into my pocket….for the time being. I managed to take several more photos while he was not watching.
Christie and Jimmy were the first ones in our group to meet Dierks. Christie talked to him first and all she could muster to say was “Hi…I’m Christie……………can you sign my ticket?” However, for the little that Christie had to say, Jimmy made up for it. Jimmy went on a soapbox talking to Dierks about canoeing. Bless Dierks’ heart, he played the role of captive listener as Jimmy went on and on about stuff that Bentley had no idea about. While Dierks was very patient, the people running the meet and greet were not. They quickly ushered Jimmy on. 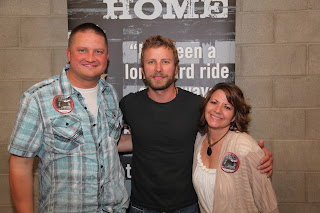 Jimmy and Christie with Dierks.

About ten minutes later, it was my turn to meet Dierks. While walking up to him I composed myself and tried to block out the adult liquids that were in my system. I initiated the conversation.

ME: Hi Dierks, I am Brent

DIERKS: Hi Brent, I’m Dierks. (Yes, even though I addressed him by his name initially, he said it again…mildly awkward).
**PICTURE IS TAKEN**
ME: Thanks for coming to Missoula. Did you end up hiking the M today? (I asked this because earlier in the day he had sent out the following tweet: good morning Missoula! so many possibilities today..hike the M, go fishing, take the jeep and a banjo into some back country,…).
DIERKS: Actually I didn’t get around to it. I ended up taking my jeep up Rattlesnake Rd.
ME: That’s awesome. That is where I live!
DIERKS: You are lucky. Beautiful country up there.
ME: Thanks for doing this Dierks.
DIERKS: No problem buddy.

And that was it, I gracefully went off to the side, making sure not to overstay my welcome. On purpose, I did not have him sign an autograph for me. As I have written about before, I find no redeeming value in an autograph. 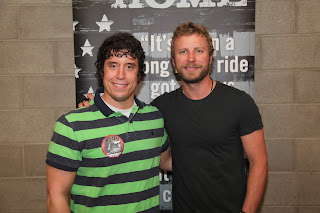 Me with Dierks. Good guy.
It was then Kathy’s turn to meet Dierks. After their greetings, she told him that she worked at a golf course in Coeur d’Alene. When she said that, Dierks responded with “The Raven?” The Raven is a popular golf course in the CDA area. Kathy responded with “Actually the Coeur d’Alene Resort.” To this, Dierks responded, “Well I will have to find you next time.” 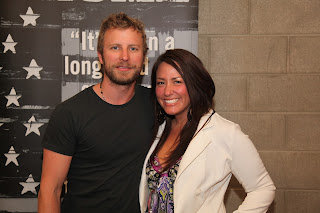 Kathy and Dierks!
Lastly, Nick got his turn to meet Dierks. As Nick is really good at kissing ass, he told Dierks that the whole state of Montana had come out to see him perform. After some pleasantries between the two, Nick informed Dierks  to hang in there because there were hot girls at the end of the line (a couple who happen to be on the Dance Team). To this Dierks slyly responded, “Saving the best for last.” Classic. 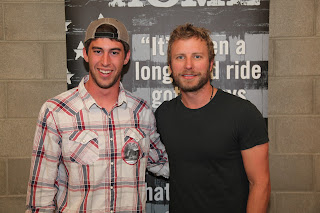 Nick and Dierks.
What struck me the most about Dierks was how soft spoken he was. It was a natural conversation between him and I, it was not like he was some over the top personality who made me shiver in my shoes when he talked with me. But thinking about it, this should not surprise me that much. In the past several months I have met other country stars such as Toby Keith, Summer Sweeney, and Justin Moore and they are all the same…they talk to you like a normal person. Obviously, this is because they are normal people themselves. Just normal people who have extraordinary talents who happened to work their butts off to cultivate their talents as much as possible. There really is something to that southern charm as country superstars are the nicest celebrities you will meet. I am glad I got to meet another one this past Thursday. Don’t Blink.

Posts about other country stars I have met:
Toby Keith
Justin Moore