One of the cool things about working inside a venue that houses a 7,000 seat arena is that you are constantly around exciting events and acts that come through. Besides Griz Basketball, Lady Griz Basketball, and Griz Volleyball, many other fun events take place in the Adams Center  where I work. Concerts, campaign rallies, the circus,  roller derby, the state science fair, cirque de solei, the Globetrotters,  and traveling Broadway plays are just some of the neat things I get to be in the middle of when  they roll into Missoula. Unfortunately, not all of the events that come through are as cool as the ones I just listed. In fact, one client that the Adams Center hosts annually makes me hide in my office the whole day.
Before I talk about this event I want to quickly and in plain language describe a common misconception that is prevalent among many people when it comes to Grizzly Athletics and the Adams Center.  We (Grizzly Athletics) do not own the Adams Center. In fact, the Adams Center is its own entity ran by its own staff. We shell out a lot of money each year to rent out the office space and facilities inside the venue. Bottom line, we are tenants.  Many people in the community believe that Grizzly Athletics has some type of association/agreement with each act/event that comes into the Adams Center. We don’t. Obviously, this makes it so we have zero control over who utilizes the venue when Grizzly Athletics events are not going on. As I said above, many of the different events are awesome…but not all.
Today was the start of the annual Missoula Gun and Antique Show. Hosted inside the Adams Center, it is a weekend long event that runs through Sunday night. Thank God I have no work to do over the weekend.
This gun/antique show takes over the whole Adams Center venue. Wooden tables pushed closely together take up all the space on the arena floor, the concourse, and the main lobby. When I left work Thursday night all I saw were bare wooden tables positioned all throughout the Adams Center. The pleasant smell of wood even filled the lobby. When I returned to work this morning I was greeted with chaos.  By 10:30am, the whole place was full of predominately bearded old men in overalls and straw hats stalking around the tables that were now covered with random colored cloths and loads of guns and “antiques”.  An old, musty smell overpowered the whole place and faint dust filled the air. I immediately became depressed. 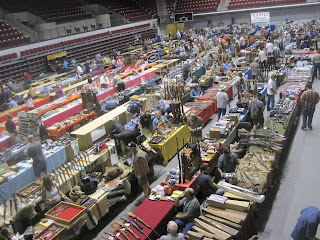 The arena floor during the gun show

If you were thinking that they might be showcasing slick and lightweight  military type assault rifles or Russian silencers, think again. The guns at this show are, how should I put this, much more underwhelming. If you are one of those people who likes to spend a day at some random park dressed up in confederate soldier garb while doing Civil War battle reenactments, get to the Adams Center sometime this weekend.  Many of the guns featured are ancient, beat up, bush league pieces of equipment that would not even be able to kill a squirrel. I honestly believe I would be better off buying a cap gun at the local Dollar Tree. After what looks like spending decades in the closets of hillbillies, I have no idea what interest anyone would have in looking at any of these guns, let alone buying one of them. I do have to say that not all of the guns at the show are frauds. It looked like a few of the tables had some fine hunting rifles. They actually looked usable. The fact of the matter is that I do not know much about guns so I can’t really say too much about the quality of some of the equipment profiled at the show but I can definitely differentiate between something that is nice and something that is not. 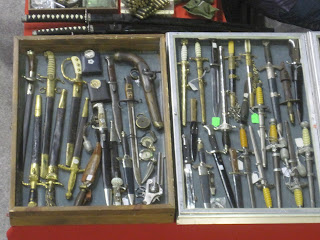 Some old school guns and knives.

I feel the biggest sham of the show is not the guns part of it but the “antiques” part of it. The only antiques at this show are some of the guns they are trying to sell. Other than that, I have never seen so much unworthy yard sale junk in my life. Water soaked, brown stained mystery novels from the 1980’s are not antiques. Playing cards that are missing half the deck are not antiques. A bedside digital alarm clock is not an antique. Ratty old t-shirts are not antiques. Painted rocks from someone’s backyard are not antiques. Stuffed animals and modern Barbie dolls are not antiques.  Much of the stuff at the show I would not even touch because of fear of picking up something. It makes Goodwill look like a Nordstrom. 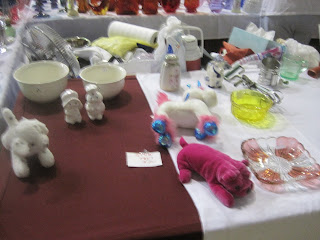 Look at some of those great…ummm…antiques??

I feel like I have been criticizing groups of people way too much in my posts lately so I am not going to talk in length about the crowd that the gun show attracts. All I am going to say is that it provides the people who live out in the middle of the woods a yearly excuse to come to Missoula. 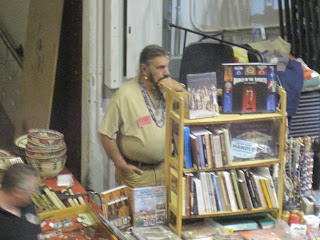 I have absolutely nothing against guns but it does unnerve me a little bit when I see little kids at the gun show.  I personally do not feel four year olds need to be in a place that is stocked with guns and knives while older men with crazy eyes pick up these guns and point them every which way.  If you find yourself with your toddler kid for the day, take him/her to the park or the pool….not the gun show.

For those of us who work in the athletic department, the Friday of the gun show is a burden. Getting to our offices from the front entrance is a complete cluster. Throughout the day, gun show participants will block our offices and block the stairs. People who we do business with do not know what the hell is going on when they approach the building and see the madness unfolding in front of them. One of the gun show ticket takers tried to get me to pay admission when I came back after the lunch hour. It is no wonder why so many people took the day off today.
Again, I want to reiterate how most of the events the Adams Center books are wonderful. I feel very fortunate to work in a place where I am constantly surrounded by so much talent and first class acts. It is a very small price to suffer through the Missoula Gun and Antique Show in exchange for all of the good we experience here. I will be sure to blog about the latter in future blog posts. Have a great weekend everyone. Don’t Blink.