Remember way back in September when I wrote about a new trend that finally made it to Missoula? That trend was the self-serve frozen yogurt craze. At the time, Missoula had recently opened a locally owned shop specializing in self-serve frozen yogurt called Yo Waffle. I reviewed it and have actually ate dessert there a couple times since my initial visit. Not too long ago, Missoula got another self-serve yogurt place called U-Swirl. Tonight I gave this new player in the Zoo Town yogurt scene a try. In this post I will review U-Swirl and then compare it to Yo Waffle.

U-Swirl is a franchise that has locations in about ten different states spread throughout the U.S. The Missoula shop has taken up residence in the old Taco Del Mar location in Russell Square right next to the Staggering Ox. So if you can visualize the old Missoula Taco Del Mar you can kind of picture the U-Swirl environment. 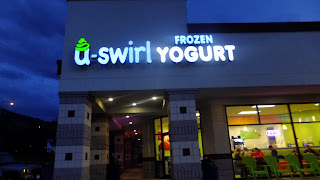 When I walked into U-Swirl I was a little surprised that to start building your creation you have to walk to the opposite end of the shop than where you entered from. In other words, the ending point where you pay is straight ahead right when you walk in. As we walked to the starting point at the other end, an employee was in an animated discussion with a family who had never been to a self-serve frozen yogurt place before. The employee excitedly told them how the whole process worked and offered to serve them as many samples as they wished. The family took full advantage of the kind employee and sampled several flavors. Since this was not my first rodeo, I took a cup and started to fill it with yogurt.

The first major positive that stood out to me about U-Swirl was the multiple flavors available. They had eight dispensers with two flavors to each dispenser for a total of sixteen different flavors. Each dispenser also had a swirl option for the two flavors that it featured. The flavors were pretty diverse with selections such as coconut, Hawaiian pineapple, caramel, peach mango, very berry, Heath, and then all the traditional flavors (chocolate, vanilla, strawberry). On this night for my yogurt selections I swirled cake batter and New York cheesecake. I then added a good serving of cookies and cream. Then for good measure, I dispensed a little bit of their tart flavor on top of everything. The dispensers at U-Swirl are very powerful. When you pull down on a lever you don’t wait long at all which I really appreciated. The yogurt also came out perfectly, no mess or drips. 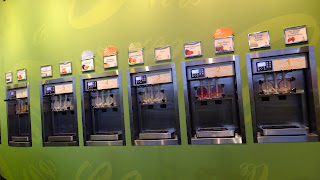 The yogurt dispensers at U-Swirl

After I got all the yogurt I needed I moved onto the toppings. At U-Swirl they do a nice job of separating all the varieties of their toppings out. In their first group of eighteen toppings they had all of their fruit selections nicely laid out. Move a little down to the left and they had the second group of eighteen candy toppings laid out. Next, they had the final group of eighteen toppings which consisted of other tasty sweet stuff such as animal cookies, chocolate rocks, butterscotch/chocolate/white chocolate chips, chocolate covered raisins, and various cereals. Finally, to top off their toppings oasis at the end of the line were all of their sauces. I should also mention that throughout all of these “stations” they had many shakers with sprinkles and such that you could quickly add on. For me, I went with crushed reeses peanut butter cups, crushed snickers, white chocolate chips, and fruity pebbles (yes, I said fruity pebbles). To top it off I put on peanut butter sauce and cupcake icing!! 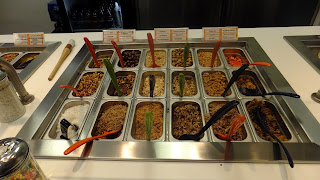 The candy section of the U-Swirl toppings.

I then went over to pay. When I go to these self-serve yogurt places and I go over to pay I can’t help but feel embarrassed. I always wonder if the cashier is saying to herself/himself “Wow, does this person care at all about his health? How can he actually eat this?” At $.39 per ounce, my yogurt dessert was just a little over $5. 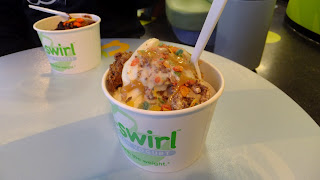 This is what I created!

We sat down to eat our creations. The seating is pretty interesting. They have tables and then they also have booths. However, they are long booths that don’t face each other but rather just kind of run against the wall. Anyway, I quickly indulged in my yogurt. Out of the four flavors I tasted, the cookies and cream was the best. It was very rich and flavorful. The tart was disgusting, big mistake getting that one…good thing I only got a tiny bit. The NY cheesecake and cake batter also were good but I wish I did not swirl them and rather dispensed them individually.  Surprisingly, the fruity pebbles proved to be a great addition as a topping. The crushed candy bars also tasted very good. The white chocolate chips got a little too frozen for my liking. The peanut butter sauce added positively to the overall taste and to be honest I never really noticed the cupcake icing. Besides the tart yogurt, I enjoyed my dessert thoroughly and for only around $5 I would say it was well worth it. 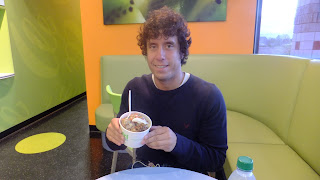 Take the picture quickly so I can finally start to EAT!
So what would I recommend, U-Swirl or Yo Waffle? If you are trying to save pennies go with U-Swirl. Their price by the ounce ($0.39) is a tad cheaper than Yo Waffle ($0.42). If you are trying to eat as healthy as possible, I would also say go with U-Swirl. They have a much wider selection of fruit toppings and a more vast selection of non-fat yogurts. They also don’t sell soda like Yo Waffle does, instead they just offer water and juice. If you want a more diverse selection of yogurt flavors, U-Swirl  wins out here too. They offer sixteen flavors at a time while Yo Waffle offers ten.
So if saving a total of maybe $0.25, holding off on a few calories, and having a little wider selection of yogurts to choose from are important to you, U-Swirl is your place. However, if you don’t really care about those three things, I think I would point you in the direction of Yo Waffle. My first reason for this is in the name…Yo Waffle offers waffles while U-Swirl doesn’t. I still love the concept of frozen yogurt and waffles together, even if I never will have the guts to pour the batter and make one for myself (read my review for my explanation). Another reason why Yo Waffle might be your best bet is simply the atmosphere. Located in the middle of downtown and with window side seating and outdoor seating, you get a little bit of Missoula culture with your dessert. Finally, Yo Waffle is local! It is one-of-a-kind and people around here love to support those local businesses.
In the end, it really does depend on your personal preference on whether you will prefer U-Swirl or Yo Waffle. U-Swirl is probably more of the “safe” bet while Yo Waffle is more of the “cultural” bet. But in all reality who am I kidding? We are talking about ice cream here, is there really anyway you can’t come out a winner? My point exactly.     Don’t Blink.

One thought on “Missoula U-Swirl Review”