Tonight I felt like a burger but I wanted to add in a little twist. I don’t eat at McDonalds, I think Five Guys is overrated, and I didn’t feel like going to a busy sit down restaurant like Montana Club or Paradise Falls. It was definitely the perfect night to try out the Burger Shack.

The Burger Shack is a hole in the wall place located in the Holiday Village shopping center. For all of you who don’t know much about Missoula, the Holiday Village area is in a less than glamorous location, right off of one of our main streets, Brooks.  In this area you got a CVS, a ghetto casino, the most disgusting dollar store you could ever imagine, a sketchy Chinese buffet, and a second hand clothing shop. Nestled in between all of these locations is the Burger Shack, an artisan hamburger shop that took the place of a questionable Mexican restaurant that I never had the guts to try. However, with my craving for a burger and based on the recommendations of a couple people, I was ready to take a chance. 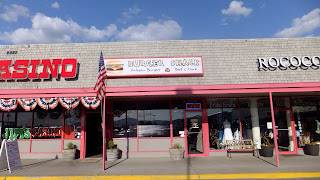 The outside of the Burger Shack

If you had to guess how nice the Burger Shack would be inside based on its exterior and its close proximity with the other businesses I just mentioned, you would probably keep your expectations rather low…and that would be a smart move. You definitely are not entering a place meant to impress even the lowest aesthetic expectations. About eight tables cover the hardwood floor of the small space. A counter in the back right hand corner serves as the post for the lone Burger Shack employee I saw. Their soda fountain is at the back of the restaurant but is not enclosed by the counter so it is out in the open although the employee is in charge of serving all the drinks/refills. The walls are covered with pictures of their various hamburgers. Also taking up lots of wall space are typed out 8.5 x 11 construction paper signs plastered all around advertising things such as their various specials and their man vs. food challenge (will explain this later). 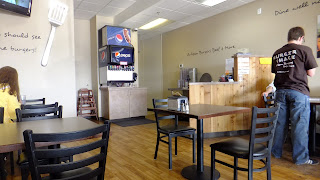 The inside of the Burger Shack.

So while the place could scare away someone like my mom who has a bit classier needs than myself, I didn’t really care about the modest surroundings. I tend to judge a restaurant based on its food rather than its scenery. Unless a place is a total disgusting hell hole, I have no problem eating in a rustic environment.

The minute our very helpful waiter brought over the menu, I immediately tweeted that I was in burger heaven. I would guess that the menu featured around twenty different burgers to choose from. All starting at 1/2lb patties, my mouth was watering at some of the available choices. You could get a spicy southern burger, a breakfast burger, a philly cheesesteak burger, a Mexican burger, a chili cheese burger, a BBQ sauce/bacon/onion ring burger, and many more. It was an absolutely daunting decision. I think for the first time ever, we had to tell the waiter twice that we needed just a couple more minutes to order. That’s how tough it was to choose. To top it all off? That was just one side of the menu! From what Dan told me, the backside had a full range of sandwiches and cheesesteaks that were also available. I never made it that far.
I ended up ordering the inside out burger. That’s correct, the inside out burger. As the name implies, this was a stuffed burger. Cooked inside the patty was fresh cut bacon and gorgonzola cheese. Dan ordered the ranchero burger, a spicy creation that came drizzled in chipotle sauce with peppers and pepper jack cheese.  All burgers come on soft, fluffy buns with all of the regular fixings. In addition, you also get to choose one side to compliment your burger. Sides include french fries, garlic fries, sweet potato fries, onion rings, cole slaw, kettle chips, and a couple others that I can’t remember. I chose the garlic fries and Dan got the chips. 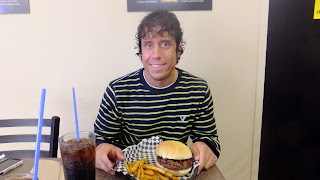 Me with my burger. Just about to dig in.

How did my burger taste? Amazing. I bit into it, and cheese started oozing out, carrying the bacon pieces with it. Both the bun and patty were so tender, a real treat to dig into. When our waiter first brought out our burger baskets, mine did not look too incredibly big for being a half pound, but looks are deceiving. I took a big initial bite into the burger and when I put it back down in the basket, I realized it looked as if I had just take a small nibble of it. It really was a beast. I admit that I felt a little guilty eating it because I could feel the alarms going off in my body singling an unhealthy assault on my digestive system but I couldn’t stop. It was a taste of true burger bliss. 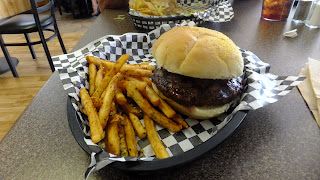 Close up of my burger. Wish I would have taken a picture of the inside of it.
Dan thoroughly enjoyed his burger as well. Dripping in sweat, he swore that the Burger Shack is by  far the best burger in town. 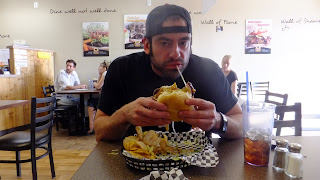 Dan enjoying every single bite of his ranchero burger.

My garlic fries were nothing to write home about. I would say they were lacking in flavor. But I have to say that I put all fries of that nature to an extremely hard test because I evaluate them based on the Seattle Mariners’ garlic fries…the absolute best concession snack in professional sports. Dan said his chips were good.

The biggest knock on the Burger Shack? It would probably be the price. Most burgers are $10.25. So while they are pricey, especially by Missoula standards, you are definitely not getting ripped off. The hamburgers are top notch quality, freshness is probably the word that stands out most to me when describing them. Also, they are a half pound. And remember, you get a side as well plus a dipping sauce. You will definitely leave the restaurant with a full stomach.
Before I close out, I would like to shine a little light on their “Man vs. Food” challenge that they offer. Titled the Triple Shack Attack, the place will prepare for you a heart attack on a plate that is made of the following: 6 patties, 6 slices of cheese, 12 pieces of bacon, 3 buns, and 1 pound of french fries. If you manage to eat the whole thing in a half hour, you receive $100 in free food (The Triple Shack Attack costs $45 to make). To this date, only two people have attempted it. One completed it, the other didn’t. Both have their picture on the wall…one under the heading of “Wall of Fame” the other under the heading of “Wall of Shame.” I think it is sad that this challenge is so unknown in Missoula. I think it would be fun for different local celebrities and personalities to give it a try. Then again, it is no wonder that the challenge is so unknown when the actual restaurant itself is relatively untapped by the community.
I strongly recommend indulging in the Burger Shack. For anyone who likes hamburgers, it is a must. The burgers are fun, tasty, and big. The service is also great. While I did give the actual restaurant itself a hard time, just have fun with it. Eating in a dive is actually a great experience. Give this local Missoula restaurant some love and sink your teeth into one of Burger Shack’s mouth-watering burgers. After your first visit, as you walk out the door you will already be thinking about the new burger you will try next time. Don’t Blink.