Last night I had the opportunity to go watch Miranda Lambert live in concert for her “Revolution Continues” tour. The tour stopped in Missoula at my place of work, the Adams Center.  To say I was anything less than excited to see this show would have been a complete lie. Miranda Lambert over the past couple years has really transformed herself into a country superstar. Along with the rest of the nation,  I was also swept up in the “Miranda Storm” that picked up countless people and threw them on her bandwagon. Opening for Miranda Lambert last night was the Randy Rogers Band and Justin Moore.
Before I get into the actual concert, I do want to tell about a unique opportunity that Fawn (my concert guest) and I got to partake in beforehand. Because I work in a department that has people in it with many connections that stretch nationwide, special perks sometimes come up. It just so happened that one of my co-workers is really good friends with Justin Moore’s travel manager. Because this certain co-worker happens to be a complete sweetheart, she pulled strings that allowed Fawn and I to participate in the Justin Moore Meet and Greet session. Now you have to realize that these meet and greets are artificial, staged, quick affairs where you are basically ushered into an area that is curtained off and you are pushed towards the star and after the hired photographer takes a quick snap shot, you are shooed out of the area. Well, when we met Justin, we made it count. We talked to him about the elk he shot that day and what he thought about Missoula. He told us that he loves it and that he told his wife earlier that they should move here. Justin Moore is incredibly short! Pretty much shockingly short when you see him. He is very soft spoken and his thick southern accent is 100% genuine. Of course he was wearing his cowboy hat and had his trademark chest hair popping out of his unbuttoned collar.  The photographer took our picture and we thanked him for his time and he thanked us for coming to his show. I became a lifelong fan in that very short minute. 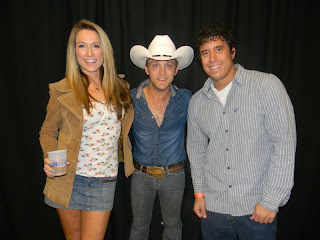 Justin Moore was so nice to us!
After getting another round of drinks, we made our way to our seats. No big deal, but we were front row on the main floor. Around the stage there was an area called “the pit” that was reserved for about fifty Miranda Lambert diehard fan club members. The stage had a catwalk extending out that allowed the pit members to gather around. The front row started exactly where the catwalk ended. There is nothing like going to a sporting event or a concert and feeling the adrenaline rush right when you get to your seats and you realize that you very well could have the best seats in the house and that your favorite performers are right in front of you. I got this kick immediately upon locating our seats.
The first opening act was the Randy Rogers Band. To be honest, I knew very little about them going in. What I knew about them really stemmed from one of my co-workers who happens to be from Texas and basically worships the ground these guys walk on. The only song I really knew that they sang was “Kiss Me in the Dark.” It  was a typical opening  act. Half of the crowd was really not paying attention, their stage setup was pretty weak, and I never really felt too much of a connection with the band. Oh well, it was not like I had too high of expectations for them coming in. It was still cool to see them so up close and to really just get a feel for how the night was going to shape out. 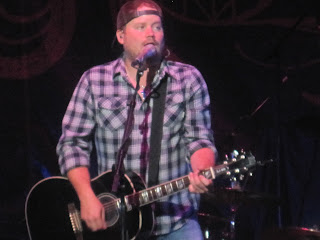 After the Randy Rogers Band set, we managed to be the most bush league people ever as we stormed past the line to enter the beer garden and once we cut off all the people waiting to get in we cut off even more people who were in the actual beer lines themselves as we zoomed right to the front, figuring we would blend in with the crowd. We got what we needed and then made our way back to our seats where we arrived just in time for Justin Moore.
This guy brought energy  to the stage. I do think part of the reason why I was feeling him right from the beginning was because he had been so nice to us but a lot of it had to do with just how he was killing it out there. Justin Moore was great with the crowd. He was funny, candid, and playful. He was very animated up on stage, something I would not have guessed during our quick one minute meet and greet. I love his hit “If Heaven Wasn’t So Far Away,” and he performed it perfectly up on stage. His new music was not too boring. He had the crowd going nuts when he sang “Small Town U.S.A.” Everything he did just worked. Now the only thing he needs are a few more hits, but I am sure they will come. 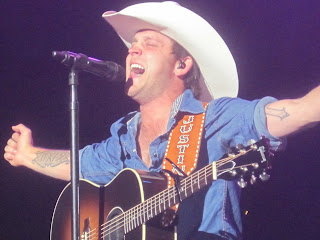 Sometimes it seems as if the period of time between the ending of the opening act and the starting of the headlining act takes forever. A lot of times I notice this long delay even with the good buzz I have going on and the carefree attitude that develops in a lot of people at concerts. However, the delay did not seem that long this time. Before you knew it, the hottest woman in country music stormed the stage to rock Missoula.
First thing is first: The Miranda Lambert physique from five years ago is not the Miranda Lambert physique of today. Yes, I was surprised at Miranda’s size when she came out. I would say she has probably gained thirty to forty pounds since her “Kerosene” video. But coming from someone who is not a string bean himself, I should probably shut up.  One thing that has not changed about Miranda is her voice. Unfortunately, I will not be making too many comparisons of Miranda with artists such as Reba and Toby but one thing she does share with those two is a distinctive voice. It fits her personality so well and it was definitely on display at the Adams Center last night. Besides her appearance, the voice was the next thing that I noticed. 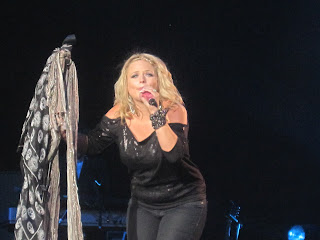 The whole production was decent. The lighting was good, the giant video boards were nice for the people sitting high up, they used a lot of smoke. Other than that, the stage was pretty basic and any type of special effects you see a lot of headliners using up on stage these days were absent. No pyros, no confetti, no flying elements. 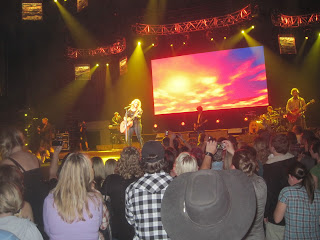 Miranda opened her set well as she sang popular, sing-along type songs such as “Only Prettier” and “Kerosene.” She then got into her new stuff. Some of it was quite good, some of it I didn’t really pay much attention to. The worst part of her set in my opinion came when she brought out her new band The Pistol Annies. The Pistol Annies are composed of Lambert and two other chicks. Lambert is not even the lead vocalist…the band is basically a project she started earlier in the year. They performed for about thirty minutes out on the stage and it just seemed out of place to me. Not only that, it was pretty boring too. I really had no interest in seeing some side project being inserted right into the middle of a show but I guess she is really into this new experiment. Anyways, I really do think the Pistol Annies killed some of the momentum that Miranda had built up throughout the show.
Once the Pistol Annies left the stage and the show started to head towards the finish line, Miranda started dropping her hits. She sang “Heart Like Mine” and then did an awesome rendition of “The House That Built Me.” That song means a lot to me and you could legitimately tell that she sang it with so much emotion and passion. It definitely brought a tear to my eye.
Before you knew it, Fawn and I had gained access to the pit area and were in touching distance of Miranda Lambert. When she sang “White Liar” she pointed at me (during the song I was jumping up and down going nuts so I kind of stuck out). That was definitely the highlight of the Miranda set for me. She then hit us with “Gun Powder and Led” which of course fired everyone up. Then, for her encore, she did something a little different. Instead of saving one of her mega hits for the last song of the night, she sang a song that was about Montana totally unplugged. Now of course she probably does this for every state on her tour but nonetheless it was really cool and  the story she used to lead into it was awesome. She then had the Randy Rogers Band, Justin Moore, and the Pistol Annies come up on stage and everyone sang “King of the Road.” The encore was definitely different from most other concerts but I liked it. I give her bonus points for trying something new. 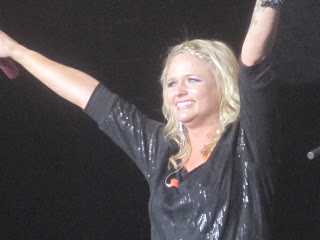 Miranda gets props from me

I would give the whole Miranda Lambert show probably a 7 out of 10. She played for a long time, was good to the crowd, put forth a strong effort, and sang all her hits. I think I just docked points for the dull middle part of the set and the decision to not really implement any of the cool modern technology  into the stage.
So what would I say my favorite part of last night was? Would it be meeting Justin Moore? Our great seats? Getting pointed at by Miranda Lambert? Actually, the answer is “no” to all three of these. My favorite part was probably the opportunity I had to really enjoy the night with a lot of my co-workers. I know I did not mention this earlier in my post, but a lot of people from the Montana athletic department attended the concert. During the busiest time of the year for us it was so refreshing to be able to hang out with one another in a fun setting. Making it kind of ironic was the fact that we were literally having  a ball in the facility where we are pretty much locked into for ungodly hours during these very busy months. It definitely did not seem like a prison last night. Even though we were not all sitting together, we went out before the concert,  hung out in between sets during the show, and went out afterwards. It was very cool.  I also got to show Fawn that us Grizzlies really are not that bad (she is a Montana State Bobcat). 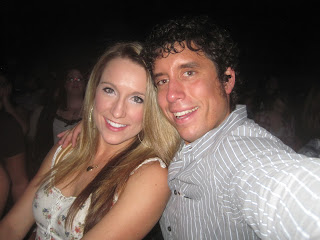 Showed this Bobcat that Grizzlies aren’t all that bad

Chalk up another concert for this guy! What a fun Tuesday night it was. As of right now I do not have a next concert on the schedule. However, I bet something will present itself soon and you can be sure that I will be there. Thanks everyone for all the fun last night. Don’t Blink.