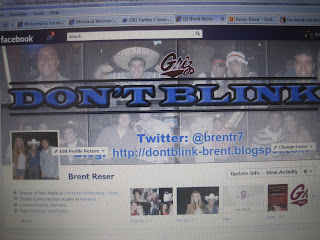 This is my cover that I created for my profile.
This week at work I will be spending a lot of time designing covers for the various Facebook pages I run for Grizzly Athletics. Once these Facebook changes take effect, I am going to be ready for it. I said that a lot of regular Facebook users are going to get a little crazy when they wake up to find Facebook dramatically transformed but I also predict the exact same type of reaction from the corporate world. Facebook as we know it is going to change and I am going to be very interested in seeing how various businesses, companies, and government/educational institutions adapt to it. One thing is for sure, Grizzly Athletics will be in with the new the second the changes take effect.
I would say that I am a little surprised that Facebook introduced new changes just a month ago considering they are rolling out the major redesign this week. I guess it is kind of tough to see the point of doing so but I also can kind of see Mark Zuckerberg smiling at driving the world that is so dependent on his creation absolutely crazy.
So here is my warning to all of you. Get ready for change and get ready to embrace it. The new Facebook will give you the opportunity to further your own personal brand and tell the story of “you” much more effectively. While other people take the time to complain about it, you should take that time to learn everything there is to know about the new Facebook and become very proficient at it. This new version is here to stay and it is going to rock the social media world. Be ready. Don’t Blink.