Last night I returned from Los Angeles, California, capping off a weekend of Dodger Baseball and sunshine for my brother and I. Up until last Friday, I had never spent any significant time in Los Angeles before. It was nice to explore a city that is so important to the country.
Glen and I took off from the Spokane International Airport early in the morning on Friday. We flew into Salt Lake City and had a one hour layover there before flying into LAX. Once we got our luggage we took a shuttle from the airport to our hotel. When traveling, I always tend to opt for using shuttles/cabs as opposed to rental cars. Especially in a new city, I feel it is less stressful to leave the driving up to people who know the surroundings. Besides, typically on vacations most people relax with having a few drinks and drinking and driving is never okay, especially when you are using someone else’s car and you are in an unfamiliar city.
We got to our hotel, the J.W. Marriott, at around 1:30pm on Friday. Located right in the middle of L.A. Live in the heart of downtown Los Angeles, I knew our hotel was going to be nice, I did not know it was going to be as luxurious as it was though. We walked into the doors of the hotel  and immediately we were greeted by hotel employees offering us complimentary fruit punch and lemonade drinks while welcoming us to the property. Our eyes starting going from side to side as we examined the beautiful, modern lobby with brightly colored decorations and very contemporary furniture. We proceeded to the registration desk and got top notch service from our hotel representative. We got our room keys and went  up to the 19th floor where our guestroom was. Just as hip and modern as the lobby and with a view over L.A. Live, it was pretty cool. 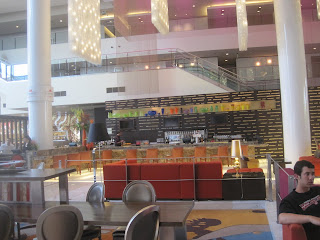 The lobby/lounge area at the J.W. Marriott

Our first order of business was to go to a restaurant called the Yardhouse, a place known for having over 130 beers on tap and a delicious food menu. We were going to meet Glen’s friend, Chelsea, for lunch. Glen knows Chelsea from high school and this past summer they played on the same Hoopfest team. They were rolling through their bracket until Chelsea tore her ACL, ending their tournament run. We ate lunch and got Chelsea’s recommendations on what to do during our time in LA. After lunch Glen and I went to the hotel lounge and had a couple drinks and then hopped on a cab and went to Chavez Ravine,  the neighborhood area where Dodger Stadium is located. Before going to the stadium,  we roamed  the streets of Chavez Ravine. This neighborhood is very ethnic and crime is prevalent but it was a great eye opener and a change of pace for us. We went inside some random bar and had a couple beers before walking over to Dodger Stadium. Dodger Stadium is situated on a hill and to access it, you have to do some walking. We were so excited to get into the stadium that the walk did not bother us at all. Right when we entered the stadium we got Dodger Dogs and beers and went down to the front row behind the Dodger dugout to watch batting practice. We had a great time watching players, coaches, and media walk right in front of us. There were also many Dodger legends walking around too (George Foster, Fernando Valenzuela, Ron Cey) that we got to see within two inches of us…thank you Glen for being able to identify all of them right away! Glen and Chelsea at the Yardhouse 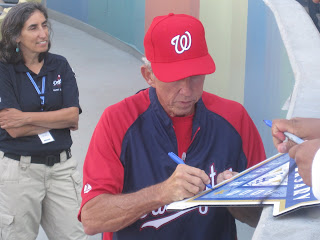 Nationals Manager Davey Johnson came right over to us!

We got to our seats which were in the front row down the left field line and watched the game. It was the opener of a 3 game series with the Nationals. Dodger games seem to focus much more on baseball as opposed to the other MLB stadiums I have visited, which is cool.  As for the game, John Lannan of the Nationals pitched a great game and even hit a home run as Washington beat the Dodgers, 7-2. After the game, the Dodgers invited everyone onto the field for a fireworks show. I could not believe fans were invited to run around on the hallowed playing surface of Dodger Stadium! It was awesome and definitely one of the highlights of the trip. Glen and I had such a fun time as we took pictures and acted like players. The actual fireworks show kicked ass too. After the fireworks finished, we took a cab back to our hotel and explored L.A. Live for the rest of the night. 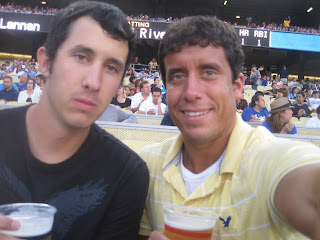 Glen and I in our seats the first night. 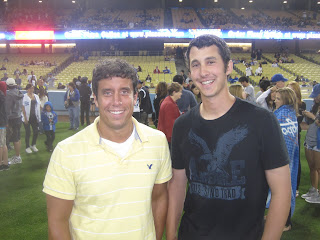 Glen and I on the field at Dodger Stadium getting ready for fireworks.

Saturday morning began with Glen and I going up to the fourth floor rooftop swimming pool at the J.W. Marriott. The weather was fantastic and the pool was at a perfect temperature. We would lay out for a little bit, swim for a little bit, and then admire the view overlooking L.A. Live. The whole experience had “California” written all over it. I had never had a pool morning quite like it. 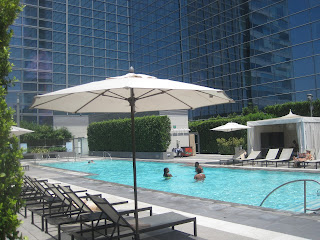 The pool at the J.W. Marriott

After we got out of the pool we went to the lounge to have drinks and wait for my very good friend, Bri, to arrive. When I started working at Grizzly Athletics, Bri was one of the first friends I made who also worked on campus. She left UM to take a job at an advertising agency in L.A.  Right when I booked our trip I knew I was going to have to see her one way or the other. Bri was nice enough to make the journey from Santa Monica to L.A. Live to see us. After we hung in the lounge for a little bit, we went to a trendy Mexican restaurant called Rosa Mexicana.  We enjoyed a very different style of Mexican food while catching up. After lunch we went to a New Zealand ice cream shop. Bri then departed for the day and Glen and I went into the ESPN Zone (located right next to our hotel) for drinks. From there we went back out to Chavez Ravine to watch game 2 of the Dodgers-Nationals series. 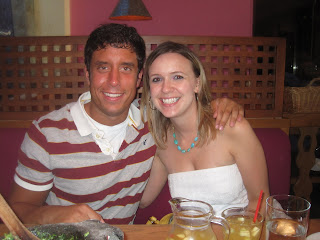 Bri and I reuntied after a long time!

Saturday night’s game was $1 Dodger Dog Night. Get this, on every other night, Dodger Dogs are $5…that is a pretty steep price reduction. If you wanted, you could get five Dodger Dogs for just $5 on Saturday night instead of paying $25 on any other night! Glen and I took full advantage of the promotion and got our fill of Dodger Dogs. It was another gorgeous night in Southern California and the Dodgers played better, defeating the Nationals in the bottom of the ninth off a Rafael Furcal walk off double. For this game, we had even better seats than the night before. Although we were back a few more rows, we were closer to home plate and at a much better angle. For about half the game I was seated next to one of those bush league, belligerent drunks I blog about here, but he soon left as he could not handle his alcohol adequately enough. Like I said, I do not let those type of people get to me that much. 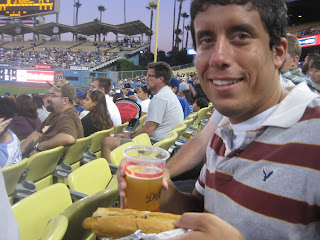 Me with a Dodger Dog and a cold one.

After the game, Glen and I decided to party in Chavez Ravine for the night. We knew it was kind of a risk but we wanted to get a different taste of Los Angeles so we gave it a go. We had a great time. The first bar we went to was called the Gold Room. This place was packed shoulder to shoulder with people our age and the prices were great and the beer was COLD. My only complaint was that they served unsalted peanuts. The music was awesome and we had a lot of fun mixing in with the locals. Next, we went to a bar called El Compadre. We were the only two white boys in the joint. It was a ton of fun and the bartender hooked us up with free shots and we got to see plenty of beautiful senoritas.
The bars closed and we went back to LA Live and went to a landmark diner in downtown Los Angeles called the Pantry. Even at 3am in the morning, the line that was spilling out onto the sidewalk to just get into the diner was about 15 people deep. We eventually got into the place and had some great food. 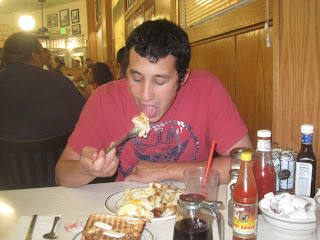 Glen digging into his food at The Pantry.

Sunday morning we got up ready to go to the Sunday afternoon series finale between the Dodgers and Nationals. Only this game was a little different from the previous two. Why? Bri and Chelsea were coming with us! Despite living in Los Angeles, both of these girls had never been to a Dodger game before. Glen and I were honored to give them their first taste of Dodger Baseball while at the same time hang out with our good friends who we do not get to see enough. We waited for them in the lobby and then took a cab one more time to Chavez Ravine. We walked into the stadium and were given hats as it was Cap Day. We proudly wore them as we sat in the Loge level of Dodger Stadium (fancy word for second deck). It was a warm day but we were protected by the shade and all four of us had a blast. The Dodgers used a strong performance from Chad Billingsley to defeat the Nationals 3-1. Not only did the Dodgers win the game but they won the series as well. As we left the stadium I made sure to give it one last, long good…we had a great time there. 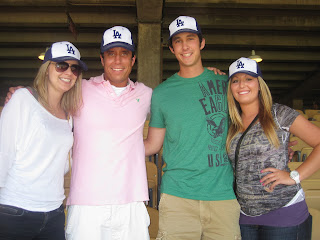 Our crew for the Sunday Dodgers game (Bri, me, Glen, and Chelsea)

We got back to LA Live and I said goodbye to Bri. Glen, Chelsea, and myself then went to the ESPN patio where we sat out on their patio and had appetizers and drinks while people watching and listening to good music. After ESPN Zone, we hung outside LA Live and just chilled and talked. Later on in the night, Glen and I went back to ESPN Zone AGAIN, this time just for drinks. We then went back to the Yardhouse where we spent the rest of the night trying to drink as many of the 130 beers on tap that we could. 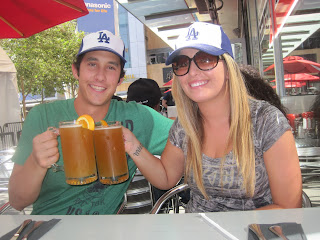 Glen and Chelsea at the ESPN Zone.

Monday morning we packed up our stuff and hopped on our shuttle and went back to LAX where we would spend most of the day getting back to Spokane as we had a long layover in Salt Lake City.
I had a wonderful time in Los Angeles. I really enjoyed the Southern California lifestyle. There is no doubt I would love to live in that climate. I felt so fortunate to be able to spend more quality time with my brother. When we were down there, we had so many people approach us and ask if we were brothers. I never knew it showed that much but I guess it does. My next goal is to get him to visit me in Missoula.  What a great brother he is! 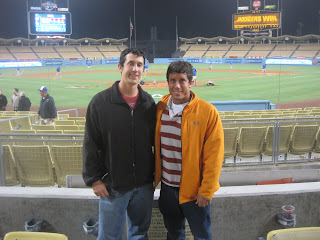 Thanks for the great time, Los Angeles. Don’t Blink.

One thought on “Los Angeles Trip 2011: Great time with my brother”