Last night marked the home opener for the Missoula Osprey. In a game played on a beautiful summer night in front of a little over 3,000 people, the Osprey rallied from a 4-0 deficit to defeat the Helena Brewers by a score of 5-4. It was amazing to be at the ballpark again as Osprey games are one of my favorite things to do during the summer. 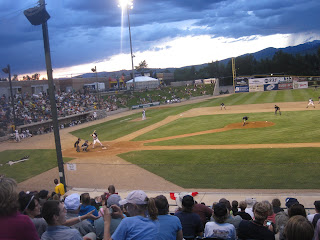 The Missoula Osprey are a Class-A Short Season Rookie League level team. In other words, they are the lowest of the low on the tall totem pole that leads to the Major Leagues. It is certainly a steep climb for all the players who start at this level. In reality, 90% of the players on the Missoula Osprey will never play a game in the Major Leagues. Despite this sobering fact, the level of play has absolutely no bearing on my enjoyment of the game. I should actually say that if anything, the level of play is superb. These ball players are still professionals and they are getting paid to play. Many of them were standouts on their NCAA teams and many of them are bright young talents from latin America.
But as I said above, good or bad, the quality of baseball is not the reason why I enjoy going to Missoula Osprey games. Rather, I attend because of my love for the game of baseball, the atmosphere at the games, and the relaxation I attain while watching.
I am a baseball nut. I love, appreciate, and respect the game. I avidly follow the Seattle Mariners, often watching their games in entirety on Root Sports. During my brother’s collegiate seasons (he is a gold glove winning/all-first team player for the Central Washington Wildcats), I make as many trips as possible to watch him play. I make my best effort to attend every home game that the University of Montana club baseball team plays in during the spring. I catch as many legion games as possible. “Baseball Tonight” is my favorite show during the summer and each morning I study the Major League box scores and standings in the paper. By the end of this summer, I will have made trips to three different Major League ballparks to watch a total of seven games in person. I have a passion for baseball. The fact that a minor league team stages a season right in the heart of Missoula in a beautiful ballpark obviously proves irresistible to me. Over the past two summers, I have made around 80% of the home games that the Osprey play. Summer travel always makes it so I miss some games…and that hurts. This summer I will miss even more. My love for America’s Pastime causes me to run out of the office every day at 5pm, workout as fast as possible, and then haul out to the ballpark in time to watch the first pitch at 7:05pm. Small price for something you love.
Another big draw for me when it comes to attending the games is the atmosphere. Last night when I walked into the ballpark of the Missoula Osprey, Ogren Park at Allegiance Field, I immediately felt the infectious buzz that fills the stadium every summer night there is a game. Contributing to this buzz is always the variety of people walking around, good music playing over the PA, ball players warming up while the grounds crew preps the field for the last time, and the amalgam of sweet smells generated by the concession stands that hit your nose right when you walk through the gate. From the moment this initial buzz greets you, it stays with you for most of the game. During the game, I half pay attention to what is going on in the field and half pay attention to the people sitting around me. The Osprey organization does a great job of keeping the fans involved in the game. Between innings they do a variety of different promotions. They have season long mainstays such as the Ollie base running race, the changing of the bases challenge, and the peanut inning (the one I could do without) while also adding in different promotions throughout the season. When you go to as many games as I do, you start to make friends with the ushers, concession stand workers, and general fans. This makes the experience all the better when you have a relationship with the people who are making the game possible. Besides making new friends, another great part of the Osprey games is seeing all of your old friends! Ogren Field is definitely a place to see and be seen. Just standing out on the concourse for two minutes you are going to see people you know. Osprey games are definitely social events, and when you have a good social scene you are going to have a good atmosphere. 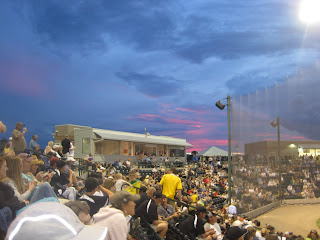 Probably my favorite part of Osprey games though is the deep feeling of relaxation that I attain each time I visit the ballpark. Really, any sporting event I attend is usually relaxing because I am so used to staging Griz games in high stress situations that being able to observe any game as a fan is a real treat. However, Osprey games are even more relaxing than your typical sporting contest. These games are laid back, low key affairs. It is not like an NFL game where you are going to spend every ounce of energy you got cheering on your team while getting smashed. At the Osprey games I love to just chill out in my seat and on the concourse while sipping cold beer. This season, the ballpark has a great selection of Montana microbrews and at $5 a cup it sure beats any Major League park’s price. But back to the relaxation part of it. There is something just so nice and peaceful about being at the game when it is still day out and then watching as the sun sets and the darkness rolls in. Really nothing like it. I definitely escape at the games and distance myself from any professional or personal stress. I really would recommend an Osprey game over yoga.
Well I got to get going because the Osprey are about to take on the Helena Brewers once again tonight. I am off to the ballpark! PLAY BALL! Don’t Blink.