I am right now comfortably sitting in the nicely air conditioned house of my parents in Spokane after completing my fourth year as a court monitor for Hoopfest. This year was unique for several reasons. Overall, it was a wonderful experience.
Let me start off by detailing to you what a court monitor is. For most of the 400+ courts at Hoopfest, there is a court monitor who basically administers the game for the whole bracket. He/she is NOT a referee. The players at Hoopfest call their own fouls along with other basic violations. The court monitor’s role is to make sure the score is being kept accurately, complete all the paperwork that comes with the beginning and ending of each game, keep the clock, get the games started, clarify all rules for the participants, settle disputes, and KEEP THE PEACE. Court monitors oversee over 30 games over the course of the tournament, with 20 alone just on Saturday.
This year I was assigned to the Hot 96.9 court on Washington and Main right by Auntie’s Bookstore. It was your typical 18-24 year old male recreational bracket. However, this year was a little different in that I was with another court monitor over the weekend. I had the pleasure of being paired with Carissa, a very nice software trainer with a great attitude. She requested that she have someone with her during the tournament and our court marshal paired me with her. We had great rapport throughout the whole tournament and gave everyone in our bracket a good experience. It was kind of funny, Carissa’s birthday was coincidently today. During the team  briefing before many of the games, I quizzed the players on how old they thought Carissa was by baiting them with free ice cream for the team that came the closest. Most said either 24 or 25….she turned 34 today. Yeah, she looks pretty good. 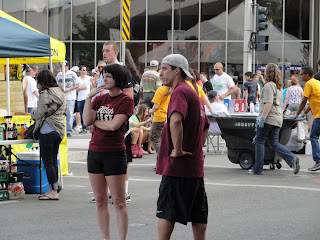 Carissa and I during one of the games

Another unique aspect of this year’s Hoopfest was that I had a bracket with no assholes in it (for the most part). Hoopfest attracts everyone, and I mean everyone. Usually, it is not uncommon to get a team of gang bangers, a team of white trash, a team that cheats, a team with loud and classless parents/fans, and a team that is only registered in the tournament to  get into fights. This year, my bracket had serious players in it who played hard and were respectful. The quality of basketball was also quite high. A small scuffle broke out in the consolation championship game but we took care of that like nobody’s business and had no further problems. That is pretty incredible to go through a tournament so smoothly. I definitely want to send a big thank you out to all of the players on the Hot 96.9 court, you guys were awesome. 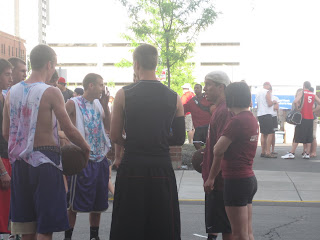 Pre-game meeting with two of our teams.

Maybe this next anomaly is not too much of a stretch considering the weather we have had in this part of the country this year but this Hoopfest weekend was very mild. Usually it is very warm for Hoopfest. On Saturday, the high temperature barely pushed 70 degrees and for much of the afternoon it was overcast and breezy. On Sunday, temperatures warmed up about five to seven degrees and the sun did show a little more but there were still several periods where it was overcast and the temperature was still much milder than normal. This of course was welcomed by the players who did not have to worry about battling the heat, blistering hot pavement, and dehydration. I am a sun guy, so I would not have minded hotter temperatures but there really was nothing to complain about, it was definitely comfortable.
So how did my bracket end up? In the championip game, the team that came through the winner’s bracket was MFI All Stars. They were a team made up of two players from the Tri-Cities and two players from Spokane. Coming out the loser’s bracket was a team named Four Locos. They came from the west side of Washington out of Maple Valley. In the championship game, Four Locos defeated MFI in a great game by a score of 20-18. As Hoopfest is a double elimination tournament, the victory by Four Locos made a second championship game necessary. Twenty minutes after the 20-18 nail biter, the second game started. Four Locos used the momentum they gained from their first victory to win by a wider margin in the second game, 20-13. For anyone who has ever played in a 3-on-3 basketball tournament or is familiar with the structure of one, coming out of the loser’s bracket to win such a tournament is an amazing achievement. Four Locos played SIX games today! They definitely earned the t-shirts they received for winning the tournament. 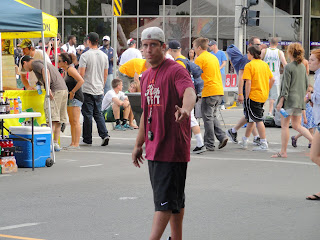 If you can distinguish between one-point and two-point baskets, you can court monitor

Needless to say, it was a fabulous weekend. I had a great time in the city I grew up in! It was nice to be with my parents and to hit up downtown Spokane with my brother and his Hoopfest teammates….crazy times. On the basketball side, it was so enjoyable to have a great bracket with great basketball. In addition, I met a new friend! Thanks a lot Hoopfest 2011. Can’t wait until next year. Don’t Blink.