My “summer to remember” continued this week as I spent Monday through most of today in Seattle, Washington. My brother and I drove over to watch the Mariners-Braves series. Before I get too far ahead of myself, let me say that the Mariners got swept by the Braves. An anemic offensive output by the Mariners negated great starting pitching by Erik Bedard, Michael Pineda, and Felix Hernandez. Despite the three losses, Glen and I had an awesome time watching our favorite team play and just an overall great time in Seattle.
We left for Seattle on Monday morning. Glen and I were both a little tired at the onset of the trip as he had just finished playing on two teams for Hoopfest over the weekend and I had had a long weekend serving as a court monitor for Hoopfest and had celebrated my friend’s birthday on Sunday night/early Monday morning.  Once we drove over the mountains though, any sign of fatigue escaped us as we started to get excited for what laid ahead. We got to Seattle and checked into the Silver Cloud Broadway hotel located in the Capitol Hill district of Seattle. After unpacking and  getting settled, we took a shuttle right out to Safeco Field. After walking down Royal Brougham and enjoying the great atmosphere that is always generated by all of the vendors selling their various food items on the street, we entered the ballpark. Glen and I went to “The Pen”, the newly installed area in Safeco Field that gives fans the opportunity to watch the pitchers warm up in a very up close and personal manner. In  this area, there is also a bunch of brand new concession stands and a happy hour that runs from when the gates open to an hour before the game. The happy hour consists of $5 draft beers which is actually a great bargain as beers regularly push the $10 mark. Glen and I were in heaven as we watched the people we watch on TV every single night from just a few feet away while eating peanuts and downing beers like it was going out of style.
Cool Story: We were watching batting practice in The Pen when a ball was hit out of the park and into the actual bullpen area. The ball landed right in front of where I was standing but the ball was about 8 feet under me and there was a fence separating The Pen area from the bullpen. All of a sudden, this 18 year old kid taps me on that back and says “Hey, will you let me take your spot for one minute and I will get that ball and give it to you?” I look at the kid and he has this contraption that consisted of a glove hung onto a rope. Having seen these types of things before, I immediately changed places with the kid. He lowered the glove into the bullpen and tried to retrieve the ball. He had no luck his first couple attempts. After struggling, we noticed  that one of the Seattle Metro Policemen assigned to the bullpen area was coming over to retrieve the ball himself. Credit the kid cause he worked well under pressure and was able to scoop the ball as the police guy was just about 5 feet away from it. The kid was true to his word and flipped me the ball. I thought that was really cool and I let him know by rewarding him with a nice tip. We need more young, smart minds like his in this world. 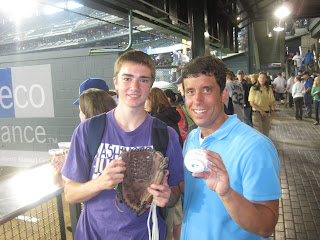 This young lad used his contraption to get me my ball

Glen and I went to our seats in time for the first pitch of the game. Our seats were amazing as we sat right at the first base bag, seventeen rows up. It was a little bit of a unique situation for me as the roof at Safeco Field was closed. I had never seen a game played under a closed roof at Safeco until Monday night. It was nice though as we did not have to battle any sun and did not have  to worry about getting rained on. Erik Bedard started the game for the Mariners and pitched great but could not get any run support as the Mariners lost 3-1.  A crowd of 26,000 watched the game, a pretty good number considering it was a Monday night and the Mariners have not drawn well at all this year.
After the game, Glen and I went back to the hotel and one of Glen’s friends came over to meet us. We then went to the Capitol Hill bar district where we bar hopped for the rest of the night going to very eccentric and quirky bars. Sometimes, it is so nice to get away from the predictability/normalcy of your hometown bar scene and go to totally new places. This past weekend (Spokane) and Monday and Tuesday night in Seattle really allowed me to do this and it was so refreshing.
Tuesday morning came quickly and it did not take long for Glen and I to find ourselves at Pike Place. I love Pike Place, it is exotic and exciting and no matter how many times I have been there over my lifetime I still always find something new. We had a great time watching a street magician, witnessing the fish throwers make the day of a few young girls who needed to catch a fish for a scavenger hunt, sampling bizarre sodas we had never heard of, and just walking around the craziness of the shops and various markets. We ate at The Pike, a brewery with great beer and great food. Since we were in Seattle I got fish and chips and Glen and I split their beer sampler that gave us the opportunity to try six of their beers. After lunch we walked to the waterfront and hit up the shops lined around the area before going to  Sluggers, a sports bar right in the vicinity of Qwest Field and Safeco to pre-game a little before entering the stadium. Once we finished at Sluggers we hit up the vendors outside the stadium and got hot dogs! We then entered the stadium and set up shop once again in The Pen, eating peanuts and drinking beer. For Tuesday night’s game, the Mariners coveted rookie pitcher, Michael Pineda, got the start. This guy is a phenom and he is also gigantic. You think he looks big on TV? Just wait until you see him standing two feet away from you. It is a special feeling when the starting pitcher walks out to the bullpen to toss his warmup pitches because everyone in The Pen area cheers as the starter enters through the gate with his entourage of the pitching coach and bullpen coach following him. It is hard to explain that moment in this blog, you just have to experience it. Trust me, it will give you an adrenaline kick. 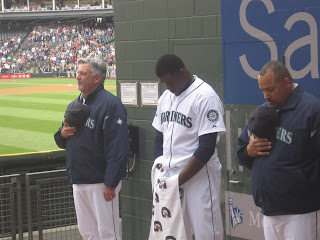 Pineda during the National Anthem

After watching Pineda warm up, Glen and I went to our seats. For tonight’s game, Glen had bought our tickets for us and they were amazing. We were on the left field line, three rows back! It was as if we were actually on the field. The roof was open for the game and it was a gorgeous night for baseball. Again, atmosphere was at a premium. Sitting behind us was a group of people probably around our age who all decided to get bombed for the game. One of the people in the party accidently dropped her popcorn all over me. I gave her a free pass because I am a nice guy….even though she was a Braves fan!! The Mariners started off hot as Ichiro hit a lead off home run and even Jack Cust managed to hit one out. However, the Braves rallied to defeat Seattle 5-4.
After the game we went back to the hotel and one of my friends from Missoula who spends the summers in Mercer Island (right next to Seattle) visited us. We spent some time in the hotel bar and then went to a place called the Canterberry. Another good night in Seattle. 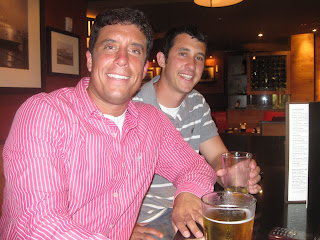 Glen and I enjoying the bar.

This morning, we awoke and packed everything up and checked out of the hotel. Good lodging definitely does not come cheap as I learned at check out. We drove around aimlessly trying to find a parking spot somewhat close to the stadium before opting to just cough up the $20 and park in the Qwest Field parking garage. Parking fees are the ultimate “gift that keeps on giving” for teams/cities. If you think about it, the Mariners play 81 home games a year. Parking is always packed with people paying the $20 to $40 fee. Do the math. That is a lot of money just based on parking spaces.
Enough of that tangent, if you can tell by my writing, I am a little tired. Glen and I got into the stadium and as you can guess, we went back to The Pen. Felix Hernandez was on the mound today so we did not want to miss seeing him warm up. Before the game, the Mariners brought in a professional group of softball home run hitters to put on an exhibition for the crowd. It was pretty cool as they consistently launched home run after home run into the second deck. After they finished, Felix started to warm up. I had never seen anyone throw as fast in person as I saw Felix throw today. It was very cool to see. For the game today, Glen and I just bought left field bleacher tickets because we knew we did not want to be sitting. Instead, we watched the game from several different places in the stadium. At Safeco it is really nice because they have all of these walkup areas where you can just stand and watch the game. We went from center field to left field to third baseline to behind home plate during the game.  Unfortunately, wherever we watched the game from did not help out the Mariners much. Felix pitched 8 innings but did not have his best stuff as the Mariners lost 5-3. After the game we got in my car and had a very smooth exit from the Seattle area and hit the road going east. 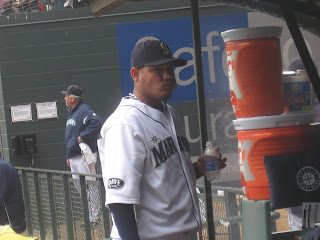 Felix just about to start his warmup session

I am once again in Spokane at my parent’s house. Tomorrow I will be getting up at 5am and then hitting the road for Missoula where I will go straight to work. Fun, huh? The state of Washington treated me so well over the past six days. Hoopfest was such an amazing time and Seattle was a blast. Thank you so much to all the great people I met over this time period. It is now time to go back to Big Sky Country and once again have another cruel reality check. Tomorrow I will post to this blog to wrap up the great month of June I had. I truly believe it was the shortest and longest month I have ever lived through. Until then, Don’t Blink.