Tomorrow my road trip summer continues as I take off to Las Vegas. My friend Dan and I will be departing from Missoula and we will meet up with my brother and his four friends who are flying into Sin City via Seattle. I am a Vegas fanatic. Since I have turned 21, I have already made four trips there. Tomorrow will mark my fifth. Some people get tired of Vegas and one trip is enough for them. Not me. In my opinion, Las Vegas is the ultimate adrenaline rush. You do whatever you want to do, whenever you want to do it. I swear the hangover gods look down on everyone in the city because while I am there, I go all day and all night long and never feel any ill effects. No hang overs/grogginess/sick feeling at all. I don’t know how to explain it. The minute I get on the plane my body shuts down.
So as I mentioned, this is my fifth time going to Vegas in the past three years. I feel I know the city well enough now. Vegas is the type of city that really will chew you up and spit you out. Besides obviously the gambling, everywhere around you there are gimmicks, schemes, and rip offs ready to take advantage of you and possibly ruin your vacation. Luckily, I feel I know how to protect myself. Yes, I have made several bad mistakes in Vegas over the past three years. My head does not always think straight. My mom will not even talk to me through phone or text while I am down there because she says “Only bad things happen to you down there.” Well, she exaggerates. However, one really bad thing did happen to me down there when I was a dumb rookie in Vegas and had no idea about the inner-workings of the city. I learned a lesson I will never forget. Here is  the story. 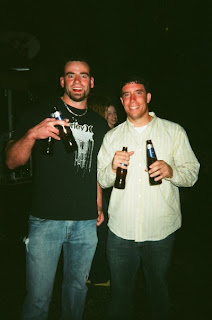 Dan and I in Vegas for the first time