The past three days I was in Coeur d’Alene, Idaho, accompanying our spirit squad to Universal Cheerleaders Association (UCA) camp. It was definitely an interesting experience but absolutely worth it. First, let me give some background.
When I refer to the spirit squad, I am talking about The University of Montana Spirit Squad which consists of our cheer team, dance team, and mascot program. As many of you know, I work in the athletic department at UM as the Director of New Media. One of the duties that I brought over from my old position as assistant marketing director to this new position is the role of mascot coordinator. This was a year where we decided to take our two performers who play Monte to camp so naturally I went along with them. UCA is the best cheerleading organization in the nation. They hold camps, workshops, and competitions around the country that are wildly popular. If you ever turn on ESPN and you see the cheerleading competitions in Disneyworld, that’s UCA. Also under its umbrella, UCA has the Universal Dancers Association (UDA).
On Wednesday morning, our group of around 40 (cheer squad, dance team, two mascots, and four coaches), piled into five suburbans and made the drive to Coeur d’Alene. I drove one of the suburbans and I am one of those drivers who never stops for anything on any drive that is under five hours. Well, when you are transporting lots of females you better be ready to stop for numerous bathroom breaks. We arrived in Coeur d’Alene and after lunch we went to North Idaho College, the host campus for the camp. We went into the gym for the welcome and we were introduced to the staff instructors. The staff consisted of elite cheerleaders, dancers, and a mascot who competed (or are still competing) at the college level. Anyway, they welcomed us by performing a routine that was loaded with cuts from “Party Rock Anthem,” “Give Me Everything Tonight,” and “Yeah 3X”…you know, everything you pretty much expected. After that, we broke into our individual sessions. 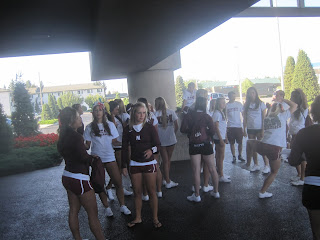 At the hotel getting ready to go to the North Idaho campus.

Before I talk about our individual sessions though, let me communicate how out of place I felt initially at the camp. When you go to a cheerleading camp, you are in a different world. You are around hundreds of collegiate cheerleaders who are passionate about cheerleading. You are around a staff that is obsessed with every little thing about cheerleading. You are around cheerleading coaches who eat, breathe, and sleep cheerleading. If you attend a camp like this and you are not a cheerleading fanatic, you are going to feel a little awkward. I knew what to expect a little because I attended UCA National in Orlando this past January but I still felt weird. I felt like I had absolutely nothing to offer. I watched as all these people worked their asses off and I kind of just watched. As time went on though I felt a little more comfortable. Being with such a great squad really helped with that. 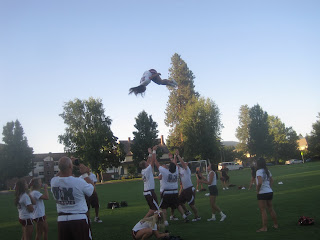 As I mentioned, I was at camp for the mascots so I attended their sessions. Besides Montana, we were joined by Butch from Washington State and then two students from the University of Idaho who play the role of Joe Vandal. Instructing the mascot campers was a dude named Kendall, a guy with an outrageous personality who performed as the mascot of the Baylor Bears during his collegiate career. This dude was one of those people with a “who cares?” attitude who does anything on his mind. He was a great dancer and a great storyteller, I laughed throughout the whole time he was instructing us. During our sessions with Kendall, the mascots were given verbal instruction/lectures/advice from Kendall, they performed on campus in random spots, and they practiced a skit they performed on the last day of camp. I was able to pull some cool stuff out of what Kendall said and I hope to use it to make our mascot program even better. 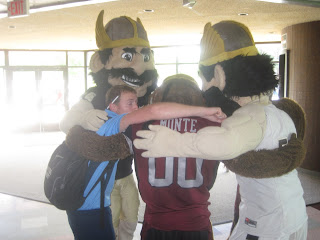 The mascots huddling up with Kendall

While we were doing our mascot thing, the cheerleaders and dancers were hard at work in their individual sessions learning dances/cheers and being evaluated by the UCA staff. Each day they were stressed to the max because they were having so many different routines thrown at them that they had to learn. When sessions were not going on, the dancers, cheerleaders, coaches, and mascots were together. We stayed at the Best Western and we ate meals together, carpooled to the campus together, and got to know each other better. This was so valuable to me because I see these people every single day coming in and out of my boss’ office (she is the director of the Spirit Squad), work with them when it comes to music at basketball games, and see them at our many offsite non-athletic appearances Grizzly Athletics participates in during the season but I don’t really get to spend time really getting to know them. This trip I got to do that. Throw out any personality stereotypes you have of collegiate dancers and cheerleaders when it comes to the UM Spirit Squad. Let me tell you, they are some of the nicest and sweetest people you will meet. They very easily could have rolled their eyes at me because A. I was with the mascots and B. I did not really do much at all but they didn’t.
I also got to know our cheer coach and our new dance coach better. I also got to spend time with my boss in a different type of setting which was good. The first night we were there, the four of us coaches hung out in the hotel lounge with the coaches from other schools and people on the UCA staff. We then moved onto an Irish bar called Paddy’s. It is definitely an experience drinking with cheer coaches. They start busting out routines from their glory days and make sure the entire place is focused on them. It is pretty hilarious. I felt out of place at first but I continued to drink and then it seemed as if I just fit right in!! Continuing my theme on bonding experiences, my boss and I went to the Toby Keith concert on the last night but that is an entirely different blog post for tomorrow…stay tuned, it will be great! 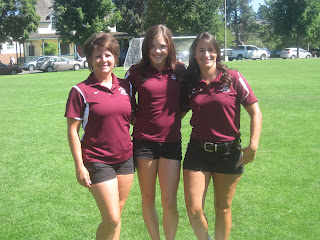 So how did our squad do? I could not have been prouder of our mascots as they were awarded CAMP CHAMP and the Leadership Award. They cleaned up and were by far and away the best mascots there. Our dance team took home the First Place Superior Award and First Place Fight Song Award. Our cheerleaders received Third Place Game Planning Award. It was a very successful camp and I felt so lucky to be associated with The University of Montana Spirit Squad. 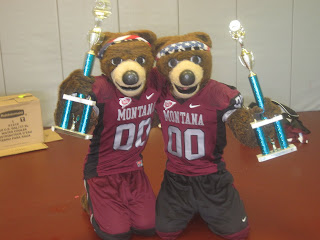 Our Montes with their trophies 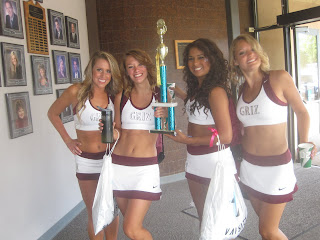 Some of our dancers with their hardware

Did I come back to Missoula with a cheerleading obsession? Did I decide to watch “Bring It On” to relive camp memories? Did I look up cheerleading stunts on youtube? No, no, and no. But what I did come back with was a newfound respect for all of the hard work that our spirit squad puts forth to be as good as they are and a stronger relationship with the young adults that make up that squad. Not bad for a few days. Don’t Blink. 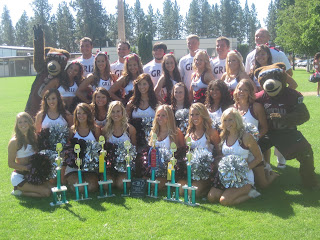