First let me apologize for not blogging in over a week and a half. It eats away at me, it really does. I do take this blog seriously and to go consecutive days in the double digits without publishing a post sucks. The worst thing anyone can do with social media is to not stay current. I dropped the ball and I apologize.
Of course I did not neglect to post simply because I was lazy. Right now I am in the middle of what we call in the intercollegiate athletics business as “crunchtime”. It is that part of the year where the sports seasons overlap each other making for some very long days and nights. With two football games the past two Saturdays and with basketball getting off and running combined with the Halloween holiday and some other fun events, the past couple weeks have been absolutely crazy. For tonight’s blog post, I want to briefly run through the business of the past week and a half.
Okay, let’s go all the way back to Friday, October 28th. This night was the Grizzly Scholarship Association Wine and Beer Festival. This year, we held it in Dahlberg Arena at the Adams Center. This event is a complete blast. The GSA gets the best wine vendors and breweries from Montana, Idaho, Washington, and California to come in and showcase their product. Of course this means endless amounts of tasting and sampling. This can be a little daunting for a guy who knows next to nothing about wine. Luckily, my lovely guest for the evening, Ashley, knew everything there is to know about wine so she educated me on what I should try and what I should do to get the full flavor of the wine. We enjoyed ourselves quite a bit…probably a little too much. By the time we left, we had owned that festival.
On Saturday, October 29th, our football team played Weber State in our Pink Game. The whole game went really smoothly and I had a great time working it. We had Benny the Bull (from the Chicago Bulls) for this game and he always adds so much energy to the whole atmosphere. I always enjoy working with him and getting his perspective on many various subjects. After the game, it was time to celebrate the first night of Halloween. I dressed up in my Hercules costume and Dan transformed into Wolverine. We first went to a large party in Missoula called Abduction and had a fun time there. My friend Lauren, who was a professional bull rider for the night, joined us. From Abduction we went downtown and bar hopped. After downtown, Dan and I went to this party in a warehouse called Bloodbath. Let me tell you, Bloodbath was something I would normally not go to but we wanted to continue partying. Bloodbath was a rave. Missoula usually does not have these parties so I guess it was cool to kind of take advantage of and have fun in a different type of setting. Dan and I stayed there from 3am to 7am…although it seemed like we were there for only 20 minutes. It was completely nuts. 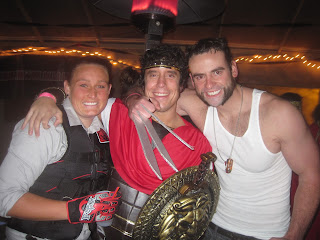 Lauren, myself, and Dan

On the 30th, I attended my friend’s 21st birthday. Her family surprised her with a stretched hummer and some of her lucky friends (me being one of them) got to climb inside and party with her. We drove around Missoula for a little bit indulging in the hummer’s drinks and then we took her to all of the various Missoula bars. I knew I probably did not need to drink on a Sunday night especially after what I did on Friday and Saturday but my friend is only going to turn twenty-one once! 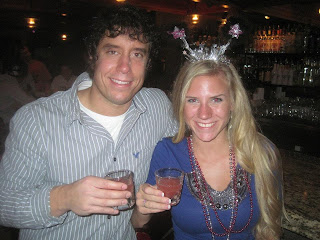 I went out for Hilary’s 21st Birthday!

After a packed day at work on Monday, it was time to celebrate the actual day of Halloween. For this night, I was an indian…war paint and all! Dan and I went down to the Iron Horse where they were having their big Halloween party.  We hit it pretty hard before going to the party so we were feeling pretty good. It was another epic night as everyone in the bar seemed to dance the evening away and the costumes were great. 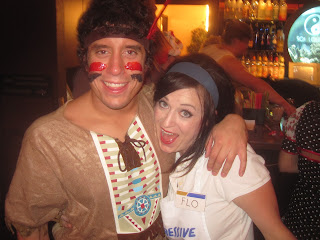 I was an indian on Monday. I found Flo!

November came and I must admit I did not feel the best at work that Tuesday. Thankfully, Ashley came in and surprised me with a HUGE breakfast of pancakes, eggs, and toast. After eating it I gained some energy and my hangover subsided and I was able to get  a lot of work done. I was at the office until 7pm and by the time I made it home I was so tired from the previous four nights that I fell asleep at 11pm and did not get a chance to blog!
On Wednesday, November 2nd, our Lady Griz basketball opened up their exhibition season. For the basketball games I serve as the DJ, so I am always busy and have to keep on my toes. Anyway, they looked really good and we got the win. Thursday night, our men’s team hosted their first exhibition game of the season. Although the play was sloppy, they also won. The first two basketball games went pretty well from our marketing standpoint. Attendance was good and everything seemed to work. The big highlight was when Monte hit a halfcourt behind the back shot during a timeout in the second half of the men’s game. Winning.
Friday came and I had my hands full with game prep (for the football game the next day), web obligations, a thousand different things different people wanted me to push via our social media channels, a meeting with a coach, and a rehearsal with the Air National Guard and the Army R.O.T.C. for our mascot entrance at Saturday’s game. All of that took me up to 7pm when our volleyball team played our in-state rival, Montana State. In a great match, the Griz came back to defeat the Bobcats. By that time it was 9pm. By the energy I got from eating a Subway sandwich I was able to work at the office until midnight. I then came home and got some rest.
On Saturday, November 5th, we hosted our final regular season football game of the year. It was Military Appreciation Day and we treated our fans to one of the best damn pregame shows anyone could ask for. We rented out the “world’s largest American flag” to cover our field during the National Anthem. If you are unfamiliar with this flag all you have to do is watch the Super Bowl, the Holiday Bowl, or any other significant football game to see the flag. We also had a flyover, a triumphant return of our Silvertip Skydivers, an awesome Monte entrance,  and numerous military tributes. To put the icing on the cake, our football team defeated Western Oregon 32-7. After the game I hit it pretty hard, pretty much securing the fact that no blog post would be written last night. 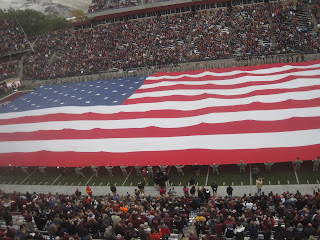 Such a cool scene!

So here we are on Sunday. Well, it is technically Monday because it is now 2am in the morning. Today (or yesterday) was great. I got to watch as our soccer team won the Big Sky Conference championship thus clinching a spot in the 2011 NCAA Tournament. I got my grocery shopping for the week done and then I went to church at 6pm and then I went to the office for a few hours and got some work done. I then came home and did some laundry, prepared myself for this upcoming week, and watched Sportscenter.
I wish I could say this upcoming week is going to be a little less busy but that is not going to be the case. With the Veteran’s Day holiday on Friday, I am going to cram a whole bunch of stuff in four days in hope that I will actually be able to enjoy the holiday and stay away from the office. We shall see. And we shall also see if I get my ass together and blog a little bit more. I promise I will do my best. Have a great week everyone. Don’t Blink.